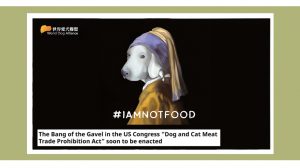 The US Senate and House of Representatives will vote through the five-year Farm Bill from December 10 to 14, 2018. This bill not only affects the market of agricultural products which is worth 867 billion USD, but also dominates the fate of 30 million dogs per year worldwide. One of the amendments states that ‘no person may knowingly ship, transport, move, deliver, receive, possess, purchase, sell, or donate a dog or cat to be slaughtered for human consumption’, those who violate this law shall be subject to a fine in an amount not greater than 5000 USD for each violation. US President Donald Trump supports the proposal of banning dog meat consumption and he will host the signing ceremony of the Farm Bill at the White House within ten days after the passage of the bill. The stipulation of the US law banning the consumption of dog and cat meat will cause a ripple effect, driving the European countries such as Britain and France to legislate, as well as pounding the hideous habit of consuming 30 million dogs annually in Asia. WDA which dedicates to advocate this legislation is, in fact, the source of this unstoppable momentum. 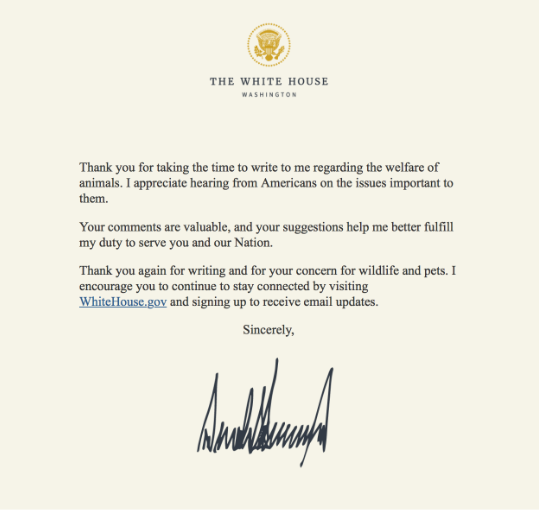 Every year, around 30 million dogs are slaughtered and consumed and 70 % among them are stolen pets. The dogs are to be inhumanely tortured before their death as some people believe that torturing the dogs will make their meat tastier. This vicious habit creates a ‘black industry chain’ and tramples on the bottom line of human morality. All countries should state in their laws to ban such unethical behaviour. The legislation in the US is especially of utmost importance as it sends a message to the world: ‘a civil society allows no cruel behaviour of consuming dog meat’.

When bringing the legislation of banning eating dog meat into reality, it is inevitable for WDA to encounter opposition. People query, ‘why should we carry out the legislation when the western countries have done no such thing?’ Now with the US soon voting through the bill, it no doubt removes a great obstacle for us to push forward legislation of banning dog meat consumption in Asia. The US, in the meantime, is the country with most people having dogs in their homes and she has never stopped improving the welfare of animals. The legislation can perfect the law of animals’ welfare and block legal loopholes. There were cases of eating dog meat in the US but no law was there to ban such action, the criminal eventually did not have to bare any consequences.

The legal ban of dog meat consumption enables the US to acquire the leading position of the US in fighting for animal welfare and defending morality. This sets the direction of human progress and lays one pivotal milestone of animal protection. 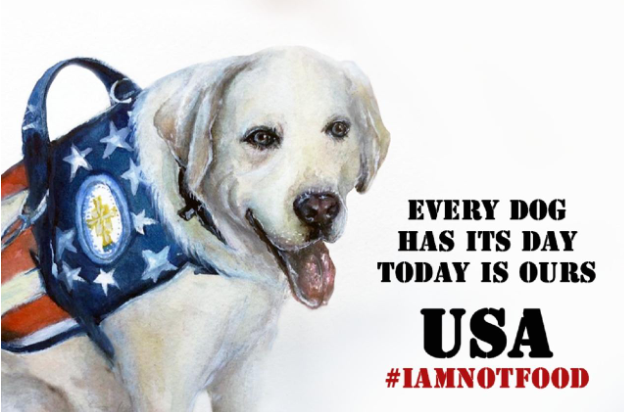 The drawing of WDA of Sully, the loyal service dog of former US President George HW Bush, to celebrate the passing of legal ban of dog meat consumption

The origin and process of legislation of the US

World Dog Alliance is the only organisation in the world advocating legal ban of dog meat consumption worldwide. With the headquarters locating in Hong Kong, WDA has offices in the US, France, Japan and Taiwan. In 2015, WDA made a film, Eating Happiness, documentating the truth of eating dog meat in Asia. The Humane Society of the United States (HSUS) contacted WDA to embark cooperation between the two. The founder of WDA Genlin agreed to HSUS’s request of 1 million USD donation for the legislation work in the US. However, there was no progress at all and HSUS had been putting WDA off after receiving the donation. WDA then decided to sue HSUS for fraud. WDA always firmly believed that the legal ban of dog meat consumption in the US would generate great impacts to the world. WDA then moved on to work with Animal Hope & Wellness Foundation in order to successful push forward the legislation process. WDA then hired American lobbyist Mr. Sean Doherty, resulting in congressman Jeff Denham proposing to add banning dog and cat meat consumption into the law.

Owing to the dispute between the Democratic Party and the Republican Party on the Farm Bill, the legislative process was like stormy waves raging across the ocean, interspersed with the twists and turns of the recess and mid-term elections. The mood of all the members of WDA fluctuated as if they were riding on a roller coaster. Major events included the House of Representatives once blocked the draft in May and the bill did not pass until June 21 with barely two votes more than the opposition side.

In the stage of rendering the bill to pass in the Senate, in addition to launching a petition in We the People, sending letters to more than 600 members of both houses, and publishing full-page advertisements in four major newspapers, the World Dog Alliance hired three lobbying companies, Wildhorse Consulting, Prime Policy and Missy Edwards Strategies and eventually succeeded in adding the provisions of banning dog meat consumption to the Senate’s Farm Bill before deadline (28/6) to ensure that the provision was retained in the final Farm Bill. 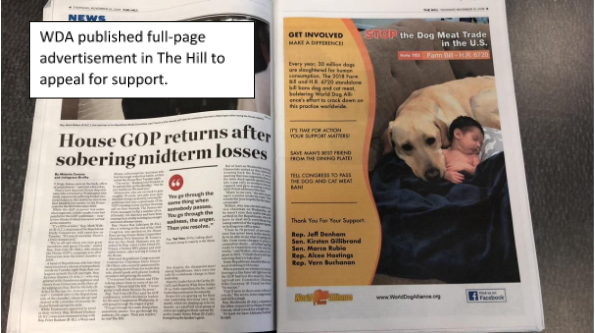 US legislation of banning dog meat consumption will influence 100 countries

World Dog Alliance was established in 2014, aiming at bring legislation of banning dog meat consumption into reality, creating a trend of such ban in the globe and changing the destiny of 30 million dogs which are to consumed as food per year. After the passage of a legal ban on dog meat consumption, WDA will further its persuasion on the Committee on Foreign Affairs to echo with the bill of H. Res. 401 of ‘urging all nations to outlaw the dog and cat meat trade and to enforce existing laws against such trade’. In the meantime, WDA is initiating movements to ban dog meat consumption in the United Kingdom, France, Japan, Vietnam, Korea and China.

In the UK, it is legal to consume dog meat if one kills that dog in a humane way. Such loophole in the UK, a country which is relatively advanced when it comes to the protection of animal welfare, is shocking and unbelievable. While watching closely over the progress of legislation in the US, WDA announced to the media in the United Kingdom that it would promote the legislation of banning dog meat consumption on 6th August, sparking coverage and heated discussion from different media like The Sun and Daily Mail. Such gesture inspired members of parliament to defend Britain’s leading status in animal protection and stimulated waves of opinions to legislate on this issue. Even the Prime Minister Theresa May herself also made a statement, indicating that the UK would soon begin the legislation process after the US in a bid to provide comprehensive protection to British people’s favorite companion.
The movement in Britain aims at blocking legal loopholes. WDA hosted an event for parliament members with over 20 parliament members attending. It is expected an independent bill will be proposed in January, 2019.

There are also loopholes regarding consuming dog meat in France. France only limits illegal slaughtering so it is not illegal to eat dog in France. In 1870, there were shops selling specifically dog meat in France and there are also alleged cases of eating dog meat nowadays. The habit of consuming dog meat still exists in French Polynesia. Every year on the French National Day, people in Tahiti will kill and eat dogs for celebration. WDA will meet with the vice president of the Groupe d’études condition animale, Typhanie Degois, in January 2019 to promote the amendment of the legislation to add banning of dog meat consumption.

Little do people know that Japan is a country where it is legal to eat dog meat. There are more than 100 restaurants, supermarkets and frozen meat merchants selling dog meat in Japan. The official records of the Japanese Ministry of Agriculture, Forestry and Fisheries have data on imported dog meat for the past 15 years. The World Dog Alliance first grasped the information on imported Japanese dog meat, and then went to Nishikawakuchi, Ikebukuro, Saitama, Japan to record the supply of dog meat in restaurants and stores, and sent it to Senator Oshima Kyushu as evidence for the debate in the parliament. It is expected that with the joint effort of parliament members and animal protection groups, the legislative process of banning dog meat consumption in Japan can be completed before 2020 Tokyo Olympics.

90% of Vietnamese love to eat dog meat, and even think that it is necessary to abuse the dog to death to make the meat tastier. The prevalent views asking for a legal ban in the US and UK, as well as their criticism against such poor behaviour, led to a potential proposal of banning the consumption of dog meat in Hanoi by the municipal government. The World Dog Alliance will meet with the Director of the Hanoi Municipal Government and Veterinary Bureau in March 2019, hoping to implement law on full ban of dog meat consumption in Hanoi in 2021.

60% of South Koreans consume dog meat, and there are more than 2,000 dog farms in the country, slaughtering 5 million dogs a year. Although young people in South Korea loathe eating dog meat, there is still no legal ban on treating dogs as food. Fortunately, under the unremitting efforts of the World Dog Alliance and the local animal protection group CARE, South Korea’s first in ever case of a dog farm farmer was sentenced for killing a dog. The Bucheon City Court ruled that “meat consumption is not a legitimate reason to kill a dog”, indicating that dogs are no longer considered as economic animals for slaughtering. The Watchdog Plan which WDA and CARE carry out together continues to rectify illegal farm in different cities. WDA also proactively work with the Korean Cangyuan to promote amending regulations to prevent eating dog in law.

There is only 20% of the Chinese population which treats dogs as food and they mostly live in second- and third-tier cities. There are no shops selling dog meat in civilized cities such as Shanghai and Shenzhen. Therefore, the World Dog Alliance recommends to push forward legislation against eating dog meat in Shanghai in 2019 as an example to the entire country. At the same time, WDA also publishes a white paper on increasing the punishment of stealing dogs in a hope to put an end to the black industry chain of dog meat.

Along with the success of legislation in the US, the World Dog Alliance has now planned a development blue print covering 100 countries including the UK, France, Commonwealth of Nations, the European Union, the Scandinavia, and the French overseas provinces. The founder of WDA, Genlin, states that:

the mission of World Dog Alliance has proceeded to the second stage from simply banning dog meat consumption legally to changing human society and saving canine lives. If the humankind wants to create an ecological world in which we can peacefully live all animals, we have to start with respecting the right of living of o companion animal and escalating such respect to a common norm. There should be no exception!