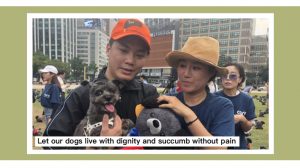 Let our dogs live with dignity and succumb without pain

World Dog Alliance has been advocating an explicit legislation against dog meat consumption worldwide by all means since 2014. Our core value is to value all kind of lives and this should be started from protecting our best friends. We aim to raise dogs’ legal status, so as to guarantee no dogs would be treated as food and secure their basic rights, regardless their breeds and values.

World Dog Alliance never accept or tolerate any forms of cruelty to dogs, including unfriendly tricks, inadequate care, abandon, abuse, slaughter, and annihilation of street dogs in some countries. However, we stress that it is our belief that euthanasia could help dogs in severe illness and injuries relieve pain, and it can be seen as a kind of animal welfare under this circumstance.

Our South Korean partner CARE has been in controversy recently or implementing euthanasia on dogs. World Dog Alliance admires their calmness and attitudes towards piles of criticism. While its president Park So-yeon believes it is time for the society to discuss euthanasia, there is a group of Taiwanese animal welfare groups urging their government, in a joint statement, to allow euthanasia in public shelters, among which some of them worship religious belief against killing.

In order to embellish its policy on killing street dogs, Taiwanese government allowed euthanasia on dogs which have been in public shelters for over 12 days and are not adapted. This has sent a misleading message to the public that euthanasia is a kind of slaughter on animals. The government then dismissed euthanasia on animals, which is legal under Animal Welfare Act, in 2017.

It states clearly on the joint statement that, the abandon on euthanasia only aims to stop public shelters from killing animals, in the name of “exceeding accommodation period”. Under the premise of animal welfare or public health, euthanasia is necessary.

Animal Welfare Act in Taiwan states that, “euthanasia could be considered when the animal is diagnosed by a vet, that it has infectious or incurable diseases, or jeopardizes public health and security.” According to CARE’s standards on euthanasia, which are “fatally harmful to humans or other animals, being agonized by infectious or incurable diseases, failure to fit in the shelters, or with severe diseases continuously.” It is crystal-clear that these standards get in line with Animal Welfare Act in Taiwan.

World Dog Alliance agrees with President Park that CARE mostly saves animals which are agonizing or even close to death. Euthanasia is the only option after all treatments have been attempted. Taiwan SPCA witnessed some dogs with severe illness or injuries dying in public shelters, with the lack of effective treatments and medical resources. It is heart-breaking to them lying on the floor and suffering until their last breaths. We believe this is the last scene animal lovers would like to see.

In countries with advanced animal welfare standards such as UK and US, the necessity of euthanasia is never doubtful. For pet dogs and working dogs, euthanasia could be implemented as long as it is approved by vets. Taiwanese animal welfare groups believe this is the best practice, after rounds of discussion, to the decision with professional vets. They have a concern that emotional animal lovers would always oppose against euthanasia, but they may not realize this only makes animals more painful.

In response to this controversy, World Dog Alliance suggests euthanasia should be implemented with professional assessment. The decision must be based on medical records and diagnosis. We believe it is a difficult decision to CARE when they implement euthanasia to animals in hospitals, after the decision is agreed unanimously in an internal meeting. Everything about those animals is recorded in detail and we believe vets would go through all information professionally before practicing euthanasia. Based on these two arguments, we are convinced that no dogs have been killed by mistakes.

World Dog Alliance applaud to President Park for her rescues on dogs during these years. Despite of piles of criticism, she does not change her will to saving our best friends. Thus, World Dog Alliance declares to stand by CARE in this trying period. Meanwhile, we agree that euthanasia should be discussed in society. An instruction to euthanasia shall be drafted, once the connection between euthanasia and animal welfare is clarified.

Apart from eradicating dog meat consumption worldwide, in the beginning of 2019, World Dog Alliance wishes every dogs could live with dignity and leave the world painlessly.