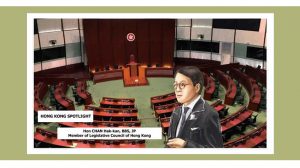 On 21st October, Gary Chan posed a question to the Secretary for Food and Health, Professor Sophia Chan, in the Legislative Council.

It has been reported that in February this year, 30 animals were suspected to have been thrown from height in Sham Tseng which left 18 of those animals dead and 12 injured, and in another case of suspected cruelty to animals, one animal was found dead and one injured. Last month, the Department of Justice (DoJ) decided not to institute prosecutions against the suspects of these two cases on grounds of insufficient evidence. In this connection, will the Government inform this Council:

(1) of the number of reported cases of suspected cruelty to animals received in each of the past three years and, among such cases, the respective numbers of those in respect of which DoJ (i) instituted prosecutions and (ii) decided not to institute prosecutions, as well as the reasons for that;

(3) whether it knows if the court has drawn up any sentencing guidelines for offences on cruelty to animals; if so, of the details; if not, the reasons for that;

(4) as some concern groups on animal rights have pointed out that the fact that prosecutions were not instituted against the suspects in a number of cases of suspected cruelty to animals has undermined the deterrent effect of the relevant legislation, of the new measures put in place by the Government to combat such crimes; and

(5) whether the Police will strengthen its training for police officers on collection of evidence in respect of cases of suspected cruelty to animals; if so, of the details; if not, the reasons for that?

Having consulted the Department of Justice (DoJ) and the Security Bureau, my reply to various parts of the question is as follows:

(1) to (3) Upon receiving reports of suspected animal cruelty cases, the Police Force (the Police) and / or the Agriculture, Fisheries and Conservation Department (AFCD) will conduct investigation. According to DoJ, in making a decision of whether or not to prosecute in each case, prosecuting officers must make an objective and professional assessment of the available evidence from law enforcement agencies and applicable law, and act in accordance with the Prosecution Code. Unless there is a reasonable prospect of conviction in the case, prosecution departments will not commence a prosecution.

The number of suspected animal cruelty reports received by the Police and AFCD and relevant prosecutions made over the past three years are tabulated as follows:

* Upon investigation, most of the cases were found to be related to nuisance and not animal cruelty.

Between January 2019 and June 2020, the total number of convictions for animal cruelty was 30. Details on penalties imposed in each case are at Annex.

DoJ generally does not maintain statistics on the number of applications of sentencing review for individual categories of offences. According to DoJ, in Secretary for Justice v Fung Chi Hoi [2019] HKCA 391, DoJ applied to the Court of Appeal for a review of sentence, and invited the Court to lay down guidelines for the sentencing of the offence of cruelty to animals. The Court held that it was inappropriate and impossible for the Court to lay down any sentencing tariff for the offence. The Court pointed out in paragraphs 20 and 24 in its judgment that:

“20. …[T]he court just cannot, based solely on certain sentencing factors or the harm suffered by the animal victim, lay down comprehensively various levels with respect to the gravity of the offence, such as high culpability, medium culpability and low culpability, etc. Therefore, it is inappropriate and impossible for the court to lay down any sentencing tariff or any scale of sentence for the offence. The court in sentencing has to consider the overall circumstances of the case and the relevant sentencing factors.

24. This court must emphasise that cruelty to animals is inhuman, causing not only physical injuries but also psychological pain and torment to the animal. Such brutal behavior is extremely disgusting and not tolerated in any civilized community, and it is also a serious crime prohibited by law. Because of its evil nature, the court in principle imposes a deterrent sentence in relation to the offence of cruelty to animals.”

As advised by DoJ, when conducting prosecutions, DoJ’s prosecutors will continue to handle all criminal cases professionally and in strict accordance with the law and the relevant guidelines in the Prosecution Code, regardless of the type of cases, and exercise the highest standard in maintaining proper administration of justice. DoJ will, in accordance with the relevant legal principles, continue to consider whether to apply for a review of sentence in each case, taking into account the actual circumstances of each case and different factors, including whether the sentence is proceeded on an error of law or that it is manifestly inadequate or excessive.

(4) The Government has been adopting a multi-pronged approach to safeguard animal welfare. In 2011, the Police launched the Animal Watch Scheme with the AFCD, the Food and Environmental Hygiene Department, the Society for the Prevention of Cruelty to Animals (SPCA), veterinary associations and animal concern groups, to combat and handle animal cruelty cases more effectively, through a four-pronged approach of education and training, publicity, intelligence gathering and investigation. The scheme reinforces collaboration among various stakeholders and strengthens Police’s efforts in the investigation of animal cruelty cases. The College of Veterinary Medicine and Life Sciences of the City University of Hong Kong joined the scheme in 2017.

To consolidate the relevant measures and encourage the public to support and assist in combating acts of cruelty to animals, the Police launched the “Animal Watchers” Scheme in 2019-20, to pool together the efforts of animal lovers at the community level through a four-pronged approach of education, publicity, investigation and intelligence gathering; raise public awareness on prevention of cruelty to animals; encourage the public to report cases in a timely manner; as well as provide information that can help investigation. Participants of the “Animal Watchers” Scheme may, through planning and participating in various animal welfare promotional activities, disseminate messages on caring for animals and prevention of cruelty to animals to the community.

In addition, the AFCD has held various education and publicity events to promote animal welfare in 2019-20, including the “Pets with Love” adoption day, collaborating with other animal welfare organisations in publicity events and organising dog training courses. The AFCD also conducted 103 education/estate seminars and 23 roving exhibitions during the period.

From the regulatory perspective, the Government proposes to amend the Prevention of Cruelty to Animals Ordinance to further safeguard animal welfare. Proposed amendments include introducing a positive duty of care on persons responsible for animals to provide for their welfare needs, as well as to enhance the provisions for prevention of animal cruelty and enhance enforcement powers to prevent and protect animals from suffering, including the introduction of an indictable offence for severe cases of cruelty. The Government conducted a public consultation on the proposed amendments last year and reported the results of the consultation to the Food Safety and Environmental Hygiene Panel of the Legislative Council in April this year. The Government understand the public’s concerns and expectations towards the legislative amendment. The Government will draft the legislation expeditiously and submit the bill to the Legislative Council for deliberation as soon as possible.

In addition, the Police, the AFCD and the SPCA have established a cooperation mechanism, whereby AFCD and SPCA officers provide professional advice and assist in investigation at the scene of an animal cruelty case where necessary.

On education and training, the Police invite AFCD and SPCA officers to explain the multi-agency approach for the investigation of animal cruelty cases to police officers participating in foundation training courses and criminal investigation training courses. The Police invite relevant officers to share their experience at seminars from time to time and include topics on the handling of animal cruelty cases in the training days of various police districts, so that frontline officers can better grasp the latest situation and trend of cruelty to animals. The Police have also set up an online depository for the dedicated criminal investigation teams to share their investigation experience and knowledge, as well as provide relevant training for officers from time to time. The Police will continue to strengthen training, with a view to enhancing police officers’ professional standards and knowledge in handling animal cruelty cases.