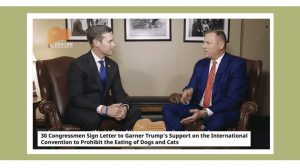 Washington — 15 Democrats and 15 Republicans in Congress submitted a joint letter urging for President Trump’s support on the International Convention to Prohibit the Eating of Dogs and Cats, which was announced at Capitol Hill by World Dog Alliance (WDA) on the 26th of September last year.

WDA has had Congressman Hastings and Congressman Davis as co-leads on the letter, which has been circulated in both Parties to garner bipartisan support in both Chambers of Congress. The letter aims to appeal for the presidential influence on a worldwide Convention that will outlaw dog and cat meat consumption for good. We thank every Congressman who signed the letter to create a brighter future for dogs and cats:

On 12th December 2018, in a groundbreaking victory for animals in the United States and across the world, the “Dog and Cat Meat Prohibition Act” was signed into law by President Trump as a provision of the Farm Bill. WDA, who lobbied Congress for the passage of the Act, is now aiming to do the same, but the scale of the campaign is global this time. WDA is currently close to success lobbying Italy to ratify the Convention, and has received widespread support in Japan and the United Kingdom.

On 28th July 2019, WDA announced its convention campaign and launched an online petition to garner public support, forming a global trend against such atrocity. Congressmen in the US and Members of Parliament in the UK have already pledged to back WDA’s convention. As Jeff Denham, former US representative who introduced the ban on dog and cat meat in the US, said in his speech, “It demonstrates our unity with other nations that have banned dog and cat meat and bolster existing international efforts to crack down on the practice worldwide.”

On 26th September 2019, WDA hosted the 5th annual 926 Dog Lovers’ Day and officially released its international convention to prohibit the eating of dog and cat meat at the Rayburn House Office Building on Capitol Hill. World Dog Alliance gave Golden Dog Award to three members of Congress who called for a dog meat ban in the United States last year, including Senator Pat Roberts, Chair of the Senate Agriculture Committee, Congressman Rodney Davis, and Congressman Alcee Hastings, who was the first Congressman who introduced the ban.

WDA is the first and only organization dedicated to “promoting clear legislation on banning dog meat consumption” in countries around the world. Through the united efforts of NGOs and dedicated individuals, the WDA hopes to end the suffering of 30 million dogs who are slaughtered annually in numerous Asian countries.

If you would like more information about this topic, please call Gordon at (852) 2519-6366, or email gordonmak@wdalliance.org.

The Co-signed Letter from 30 Congressmen to Trump

International Convention to Prohibit the Eating of Dogs and Cats

Introduction of the Convention