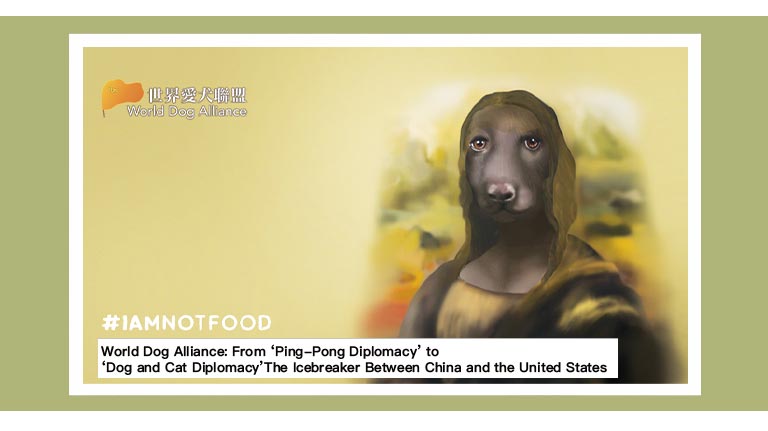 World Dog Alliance: From ‘Ping-Pong Diplomacy’ to ‘Dog and Cat Diplomacy’The Icebreaker Between China and the United States

WASHINGTON – Feburary 19, 2021 – ( Newswire.com )
The World Dog Alliance (WDA), an international animal welfare organization dedicated to promoting an explicit ban on dog and cat meat, is campaigning for a ground-breaking “Dog and Cat Diplomacy” between China and the United States, following the example of “Ping-Pong Diplomacy” in the 1970s.

“Ping-Pong Diplomacy” refers to the exchange of table tennis players between the U.S. and China in 1971, which resulted in a thaw in Sino-American relations.

Since the COVID-19 outbreak in early 2020, Genlin, the founder of The World Dog Alliance (WDA), has been calling for the Chinese government to “ban wild meat for health; ban dog and cat meat for morality.” In April 2020, Shenzhen became the first city in China to ban the consumption of dog, cat, and wild animal meat. Soon after, in May 2020, China’s Ministry of Agriculture and Rural Affairs reclassified dogs and cats from “livestock” to “companion animals.”

In his most recent campaign, Genlin has urged China and the U.S. to jointly sign the “International Agreement to Prohibit the Eating of Dogs and Cats”. The agreement aims to eradicate all forms of theft, torture, slaughter, trade and consumption of dogs and cats, and to highlight the moral responsibility we have towards dogs and cats, who are human’s companions, friends, service animals and family members. Genlin proposes that the joint signing of this agreement would be a “Dog and Cat Diplomacy”, which would help restore U.S.-China relations – mirroring the success of “Ping-Pong Diplomacy” – and end the moral crisis that kills over 20 million dogs annually in Asia.

“Ping-Pong Diplomacy” marked a pivotal moment in U.S.-China relations. Half a century later, in the midst of a rapidly changing world, the “Dog and Cat Diplomacy” that Genlin proposes will help the U.S. and China adapt to the current era and serve as another icebreaker between the two countries. Genlin hopes that their respective leaders will commit to a shared goal of “animal protection for world peace.”