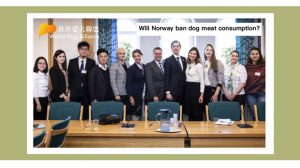 When you mention Norway, I believe everyone will think of whaling. Even with the International Whaling Commission, the Norwegian government still has no intention of stopping commercial whaling. In recent years, it has even increased the upper limit of whaling. So why does WDA want to go to Norway to promote “explication legislation against dog meat consumption”?

Although Norway’s performance in conserving whales is controversial, Norwegians cherish dogs very much and even speak out for them. Norway has established an animal police to investigate cases of cruelty to animals. At present, domestic calls for increased penalties for cruelty to animals are on the rise, and Congress intends to amend the “Canine Law” next year to protect more rights and interests of dogs.

Genlin has a unique eye and believes that the “Canine Law” is suitable for adding to the prohibition of dog meat. Therefore, he decided to take advantage of the new legislation in the United States to prohibit dog meat and launch a Norwegian legislative campaign last year.

WDA cooperated with the representative company Rud Pedersen at the beginning of the Norwegian movement. Rud Pedersen is one of the leading political lobbying companies in Northern Europe. Although the cooperation period is short, they managed to arrange for a WDA representative to learn about Norwegian culture at the first meeting.

The Norwegian representative of WDA visited in March last year. That lecture mainly introduced Norwegian politics and the concepts of different political parties. Generally speaking, the situation in Norway is similar to that of the United Kingdom, except that the Norwegian Parliament has a unicameral system with only 169 seats.

The only interesting thing is Norwegian society and culture. Norwegians pay attention to parent-child relationships. Family always comes first.. Norwegian companies also cooperate with this culture for employees, including flexible work and working from home. On behalf of the company, I shared an interesting anecdote. Once during a meeting, a congressman asked to stop the meeting because she was going to school to pick up her children home.

The Norwegian Parliament has only 169 seats, which is naturally the smallest among the three Nordic countries. Ulf Leirstein, member of the Progressive Party greeted WDA. (now retired to become an independent member). Ulf Leirstein (Ulf Leirstein) was the first parliamentarian contacted on behalf of the company, because Senator Leirstein is the promoter of the animal police and has always been concerned about animal protection issues. It’s best.

Norwegians have a trait that is worth learning from other Asian countries. They have a strong world view. I met with a few parliamentarians and they all supported the banning of dog meat. They even said that even if no one in Norway eats dog meat, it should be banned by legislation and set an example for the world. The representative of Norway explained that Norwegians have been instilled in the concept of “global citizenship” since they were young, so Norwegians believe that it is their own responsibility to contribute to the world’s progress. Of course, there are always exceptions to everything. Conservative Party questioned that no one in Norway eats dog meat. Why is it necessary to legislate to prohibit dog meat? Mr. Shu is the veteran of the Conservative Party, and the Conservative Party is the largest party in the ruling coalition, and its position is very important. Fasting of dog meat is the responsibility of a civilized society. Dr SHU’s doubts about this are really confusing.

The Norwegian chamber of assembly has a magnificent design and a style similar to that of the British House of Lords. To highlight the royal elements, gold is of course the main color. The seating arrangement of the Norwegian Parliament is very interesting, not by political parties, but by district number. How is the area code assigned? It is sorted alphabetically by region. Therefore, Norwegian parliamentarians from the same party may not all sit together unless one party wins all seats. Congressman Rellstein said with a smile that this arrangement made him very embarrassed because there were no party members sitting near him, as if being isolated, it was inconvenient to discuss the bill with party members.

The Norwegian Parliament has a special system, that is, when a member of parliament takes leave or is absent from work, its political party must send one person to serve as a substitute member until the official member returns to work. However, this has brought difficulties to the work of the WDA, because members of the WDA often take time off, and sometimes they are substitute members who meet with WDA representatives, and the substitute members are different each time. Although these substitute members have real power, they are still full members to make decisions, which makes the meeting ineffective and slow.

WDA founder Genlin often said: “I only talk about dog meat!” It is true that he is not really talking about dog meat. He supports other issues related to dog welfare, including animal police and service dog welfare.

Hong Kong Legislative Council Member Chen Keqin who made Genlin concerned about the issue. When discussing Hong Kong’s animal protection law with Mr. Xuan Ling, he mentioned that he had been promoting the establishment of an animal police, but the government and the police have been pushing the pond. Mr. Xuan Ling heard that there was an animal police in Norway and thought that Hong Kong could learn from it, so he instructed me to ask Norwegian parliamentarians about animal police in addition to promoting “clear legislation and fasting of dog meat.”

In Norway, some police officers specialize in investigating animal cruelty cases. The establishment of an animal police not only ensures that those who abuse animals are punished by law, but also conveys to the public the message that “animal life is as important as human life”.

Although the Hong Kong police has a special team to investigate animal cruelty, it is not officially named “animal police”. Animal cruelty is still a “miscellaneous” and cannot deter crime. Nevertheless, Genlin supports Hong Kong to increase the punishment for cruelty to animals. Under his impetus, the police department has installed protective equipment for police dogs, including eye masks and shoes. The Correctional Services Department is also preparing to purchase protective equipment for correctional dogs.

Genlin is for the well-being of the dogs in the world, and he is not only fasting dog meat!