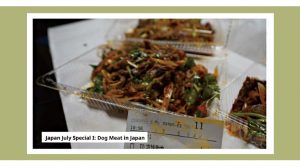 Genlin was born in China and borrowed from Japan. He has worked and lived in Japan for many years.

In the past, whenever a Chinese asked Genlin: “Do you prefer China or Japan?” Genlin always answered Japan without hesitation.

Those who asked would be surprised when they heard this response: for historical reasons, some Chinese people don’t have a very good view of Japan. Considering the listener’s feelings, few people say so decisively that they prefer Japan and would rather be ambiguous to dismiss the words.

“Then why do you like Japan more?” “Because the Japanese don’t eat dog meat!” The simple and clear answer represents Genlin’s philosophy of life.

However, Genlin found that his vision of Japan was overrated. Although Japan does not have the habit of eating dogs and cats, there are dog meat restaurants, and they sell dog meat blatantly, because there is no law prohibiting the consumption of dogs and cats in Japan.

According to a survey conducted by WDA, a total of 7.9 million households in Japan have pet dogs, and each family has an average of 1.25 pet dogs, which is worthy of the reputation of “Asia’s Animal Country.” In the minds of the majority of Japanese people, the bad habit of eating dogs has no place in modern civilized society, but there are still restaurants, supermarkets and suppliers selling dog meat in various regions of Japan.

According to statistics from the Ministry of Agriculture, Forestry and Fisheries of Japan, Japan has imported 453 tons of dog meat in the past ten years, which is equivalent to 100,000 dogs being eaten. This staggering number is incredible. Therefore, WDA sent an investigator there in September 2018. Field surveys in Japan finally found that there are currently more than 100 restaurants and frozen meat shops selling dog meat in Osaka, Kansai, Kobe and the capital Tokyo. The total number is estimated to exceed 100, and the number has been increasing in recent years. There are two reasons for the increase:

1. Japan opened its labor market to the outside world. People from other Asian countries brought the bad habits of eating dog meat to Japan and even operated dog meat restaurants.

2. Japanese people who do not eat dog meat, patronize these dog meat restaurants with an attitude of early adopters, which encourages the unhealthy trend of eating dog meat.

There are more and more dog meat restaurants, but less and less dog meat is imported from foreign countries, which makes people wonder whether there are local dog meat supply channels in Japan.

Regrettably, most Japanese people think that Japan is a dog-friendly country, and there is no dog meat problem, let alone chain-style dog meat restaurants.

In addition to this blind spot of the public, another obstacle to WDA’s promotion of banning the eating of dogs and cats in Japan is the so-called “whaling tradition” – the Japanese government is worried that the law of banning dog and cat meat will make the international community focus on Japan again because of the whaling problem.