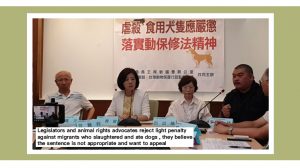 Legislators and animal rights advocates reject light penalty against migrants who slaughtered and ate dogs , they believe the sentence is not appropriate and want to appeal 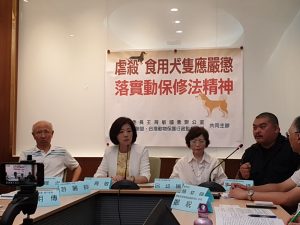 On April 11, 2017, Taiwan passed the third reading of the amendment to Animal Protection Law that prohibit the purchase, consumption or possession of cats and dogs, as well as killing or abuse of  animals. The maximum sentence is raised to 2 years and it is a big step forward for fighting animal rights in Taiwan.

However, Wang Yumin, the legislator who introduced the amendment, examined some relevant judgements before and after the introduction of the amendment. She found that those sentencing were still not heavy enough and the recent “Fengyuan Dog Meat Case” was a light sentence.  Therefore, Wang Yumin held a press conference today (19th) to tell the public the impact of such verdict, and asked various government agencies to punish the offenders severely and enforce the law properly.

After the amendment, the person who purchases, eats or possess the dog, cat as well as any food products containing meat or parts from these animals can be fined between NT$50,000 and 250,000, and the maximum penalty for offenders for killing or abusing animals is increased from 1 year to 2 years.

However, Wang Yumin said that the average criminal penalty after the revision of the law fell between 50 days to 3 months in prison. The  dog meat cases in the beginning were only sentenced to 30 and 40 days of criminal detention, and that is less than what the amendment suggests. Wang pointed out that the verdict of Fengyuan dog meat case was the most inappropriate, because the case was not only about eating dog meat, but also animal abuse. She invited Li Rongfeng, the investigator of the Taichung City animal protection office to reimagine the situation.

Li Rongfeng said that they arrived before the police, and the migrants tried to hide the tableware. Facing the big squad, the migrant ridiculed them . They felt that they were making a big fuss. Li Rongfeng said, “Why do these migrants hold such an attitude? I think it is because they are not aware of the seriousness of this matter.”  According to him,at first the migrant workers said the dog’s body was found on the side of the road  and it’s a waste that they did not eat. Li has dealt with many dog ​​cases and foreign suspects are likely to use such excuse. They later confessed that they killed the dog only when the criminal officers came to the scene and found the blood remnants on their hands.

In addition to unwashed blood, dog hair, and meat, burned dog head was also found at the scene. Li Rongfeng said that some Vietnamese believe that ” dogs that are killed in extreme pain is more beneficial to the health.” In other cases, he also saw other tools like stones, wooden sticks. In this case, the dog was directly burned, and the process was extremely painful. The act does not only violate slaughtering and eating but abuse. For the Vietnamese , dog eating can be justified as a kind of eating culture and traditions. Li Rongfeng said: “Some people will say that eating is a habit, but when they come to Taiwan , they must abide by the law.”

Lu Youlun, the representative of the World Dog Alliance in Taiwan, pointed out that due to difficulties in collecting evidence, a lot of the dog meat cases were not prosecuted. The Fengyuan dog meat case was the first case that migrant workers were sentenced for killing dogs and eating dog meat. Given such a light sentence, this may set a precedent and affect the sentence of another major dog meat case last year, the case of Miaoli’s Chiu uncle and nephew. “In the indictment of the Fengyuan case, migrant workers received education and training, so they all knew that Taiwan does not allow eating dog meat. Perhaps it was because there was no precedent so they do not take it seriously. If today’s case is a light sentence, the migrants will think they can get away by luck?” Lu Youlun called on the judiciary to stick to the original intention of the amendment. She hopes the judiciary will appeal the case and give a reasonable sentence. Animal rights groups have been fighting for years and this is not to severely punish migrant workers, but to have a deterrent effect.

The animal rights lawyer Yan Wei, explained the significance after the amendment. He said that in criminal law, if an act violates several crimes, it should be determined from the most severe crime . Therefore, in the past, the cases of the killing animals take crime of destruction which gives heavier penalty .  “But we still hope that we do not treat dogs and cats as objects. After the amendment, the punishment for violating the animal protection law is higher than the crime of destruction. To some extent, the idea that animal is a kind of possession has been overthrown and it is now more of a living being. .”

Yan Wei also pointed out that in the case of Fengyuan dog meat, the judicial system did not consider whether the offender was using vicious means. “If murder is against the law, let alone using vicious means.” He said when considering the penalty, the ill-treatment of animals should also be taken into account.

For the inspection of employers or agents, looking at pamphlets and sign-on records is not enough, more work should be done to educate migrant workers and let them know the seriousness of the incident. This matter involves not only animal protection, but if the migrant workers cannot comply with Taiwan’s laws and regulations, the public may have bad feelings against them. The Labor Development Department of the Ministry of Labor and the Agricultural Committee responded that if there is a precedent, it can help educate the public and they hope that the judicial system exerts importance to the cases while they will do their best in prevention and education.

Finally, Wang Yumin once again summed up the demands and asked the court to include the current “Sentencing Information System” and “Sentencing Trend Recommendation System” when considering cases that violate the animal protection law so that this can improve the appropriateness of sentencing. In the upcoming draft committee, the sentencing system should be set. The judges should have the original intention of the amendment in mind, and, the prosecutor should also have an appeal regarding the Fengyuan dog meat case.

“We must tell foreign migrant workers clearly that the Taiwanese law prohibits the consumption of dog meat, and if it happens, it will be prosecuted and sentenced. If someone in the past has eaten dog meat, and there is no prosecution because the evidence is insufficient, that may lead many people to think they can get away easily.” Wang Yumin said that the enforcement of the law requires everyone’s effort. The amendment of the law does not mean that animals rights have been guaranteed, and proper enforcement is the real protection for animals.