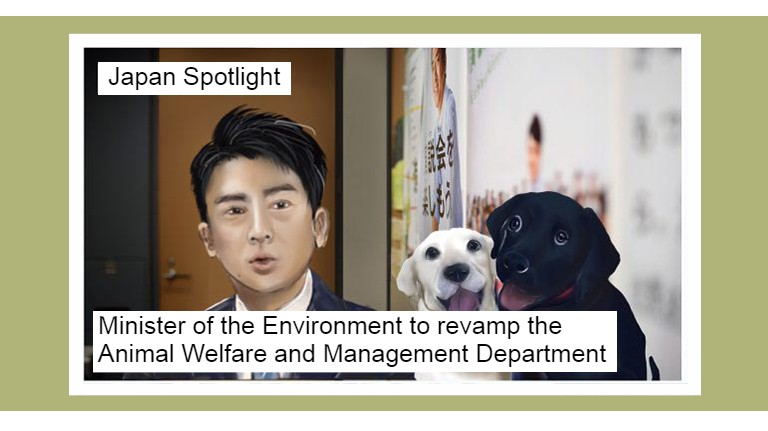 Last year on December 3, 34 lawmakers from the Parliamentary League for Animal Welfare, who resonated with the World Dog Alliance’s campaign, submitted a request letter petitioning Prime Minister Yoshihide Suga to initiate “the International Agreement to Prohibit the Eating of Dogs and Cats”. The Associated Press’s news article covering the League’s movement has been quoted and recognized by hundreds of media in Japan as a milestone in the country’s animal welfare development.

Many Japanese lawmakers had discussed banning dog and cat meat in parliamentary deliberations. In the latest deliberation, Minister of the Environment Shinjiro Koizumi gave a surprising remark on the issue, “I want to revamp the Animal Welfare and Management Department.”

The Ministry of the Environment has employed 2,900 officials, of which 1,900 are engaged in environmental administration, and only 12 belong to the Animal Welfare and Management Department, the so-called heart of animal welfare in Japan.

Many Japanese officials are ashamed of lagging behind the development of animal welfare in Taiwan, where the subject is being included in school textbooks. Minister Koizumi gave a surprising answer when asked whether he had heard about that.

“To be honest, we do have a department dedicated to animal welfare, but there isn’t enough manpower. The Ministry of Environment’s capacity and resources are limited even though the climate crisis is at hand. As the problems to be solved continuously increase, prioritization has become a difficult task.”

The attending lawmakers and officials of the Ministry of the Environment were shocked hearing Minister Koizumi’s response, as he gradually revealed his ambition to revolt the ministry .

During the WDA’s campaign for a ban on dog and cat meat, many officials responded that “a ministry responsible for that issue does not exist”. Minister Koizumi’s speech showed his determination to strengthen the Animal Welfare and Management Department, paving the way for legislation banning dog and cat meat.

The regular legislative session will commence next week. The WDA will continue to work with lawmakers to strive for a ban on dog and cat meat.

Photo: the House of Representatives 2nd Building with half the offices’ lights off at 18:15 under the state of emergency