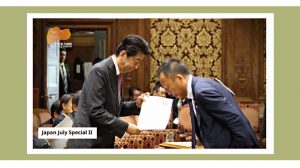 We talked about the situation of dog meat trade in Japan in previous article. Now look at some movements WDA has done so far to promotion legislation in Japan.

On 5 September 2018, representatives of WDA met with Senator Hiroe Makiyama, who is also a member of the Cadet Party, and Representative Yoichiro Aoyagi. She said that she would discuss ways to legislate on dog meat in Japan from various angles.

On 14 October 2018, in order to learn from the success of Taiwan’s legislation, Congressman Oshima specially went to Taiwan to discuss Japan’s strategy of banning dog meat with Legislator Wang.

On November 15, 2018, Congressman Oshima supported WDA to organize a dog meat prohibition event in the Japanese Diet, and distributed videos and information brochures on the current status of the dog meat trade in Japan. Twenty members of Parliament and government officials supported the clear legislation and prohibition of dog meat.

On November 19, 2018, Genlin, the founder of WDA, went to Tokyo to meet with Congressman Oshima to discuss the strategy of promoting Japanese legislation on dog meat prohibition, and dinner together.

On February 11, 2019, Genlin called on Minister of the Environment Yoshiaki Harada. The original one-hour meeting was extended to three hours. Minister Harada expressed his support for expressly legislating and prohibiting dog meat in Japan.

On February 12, 2019, Genlin and Taiwan legislator Wang Yumin went to the Japanese Diet and attended the “Explicit legislation against dog and cat meat consumption” meeting to discuss legislation with the ruling party veteran Representative Hidehisa Otsuji, officials from the Library of Congress and officials from the Ministry of the Environment. Representative Otsuji ordered the Library of Congress to conduct a thorough investigation of the US legislative process for reference.

On 13 March 2019, before the start of the Budget Committee, Congressman Oshima handed a letter from Congressman Jeff Denham, who successfully promoted the U.S. Congress to ban dog meat, to Prime Minister Abe. The letter clearly called on Japan to follow the pace of the United States as soon as possible and legislate to ban dog meat as soon as possible.