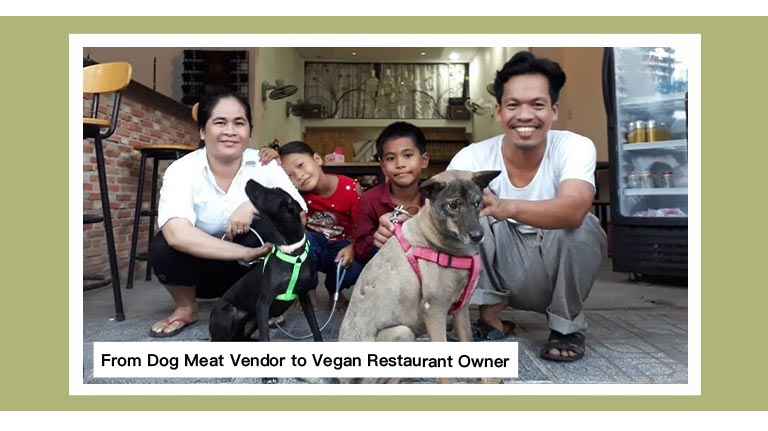 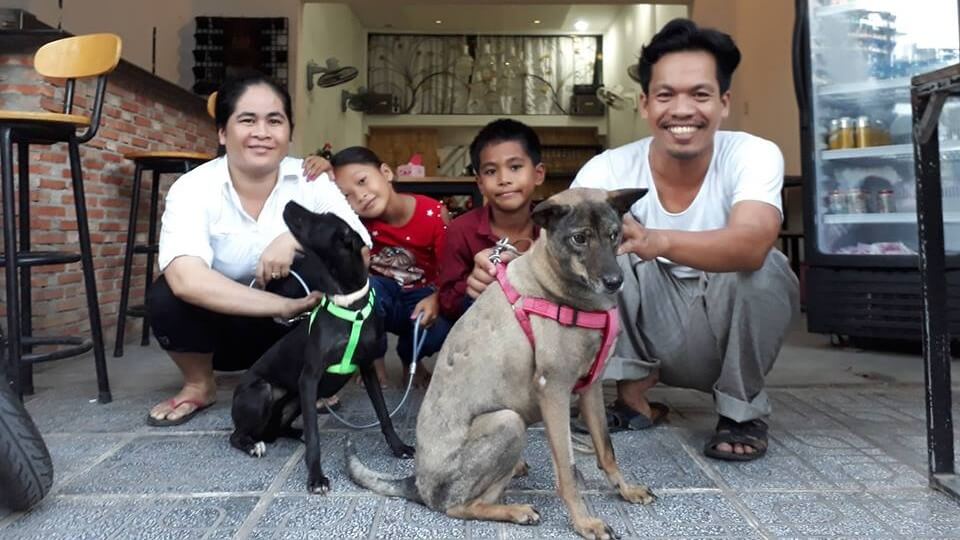 Syna and Mong shut down their dog meat restaurant and turns it into a vegan one. They welcome their customers with their dogs. They also have their own dogs in the restaurant.

There is a Chinese saying, “Put down the killing knife and become the Buddha.” It means that people who realize their mistakes abandon their sins by doing great things. Two stories happened in Cambodia and Taiwan prove that how true the Chinese saying is.

Cambodian couple Syna and Mong had their second restaurant in Phnom Penh in March, 2018. They named the restaurant “Sabay Vegilicious”, indicating it as a vegan restaurant. Although they are experienced in the catering industry, they felt nervous this time. Their first restaurant was a dog meat restaurant, which is very common in Cambodia. They had lots of customers in the past, but they were not sure if it was the same for the new restaurant. 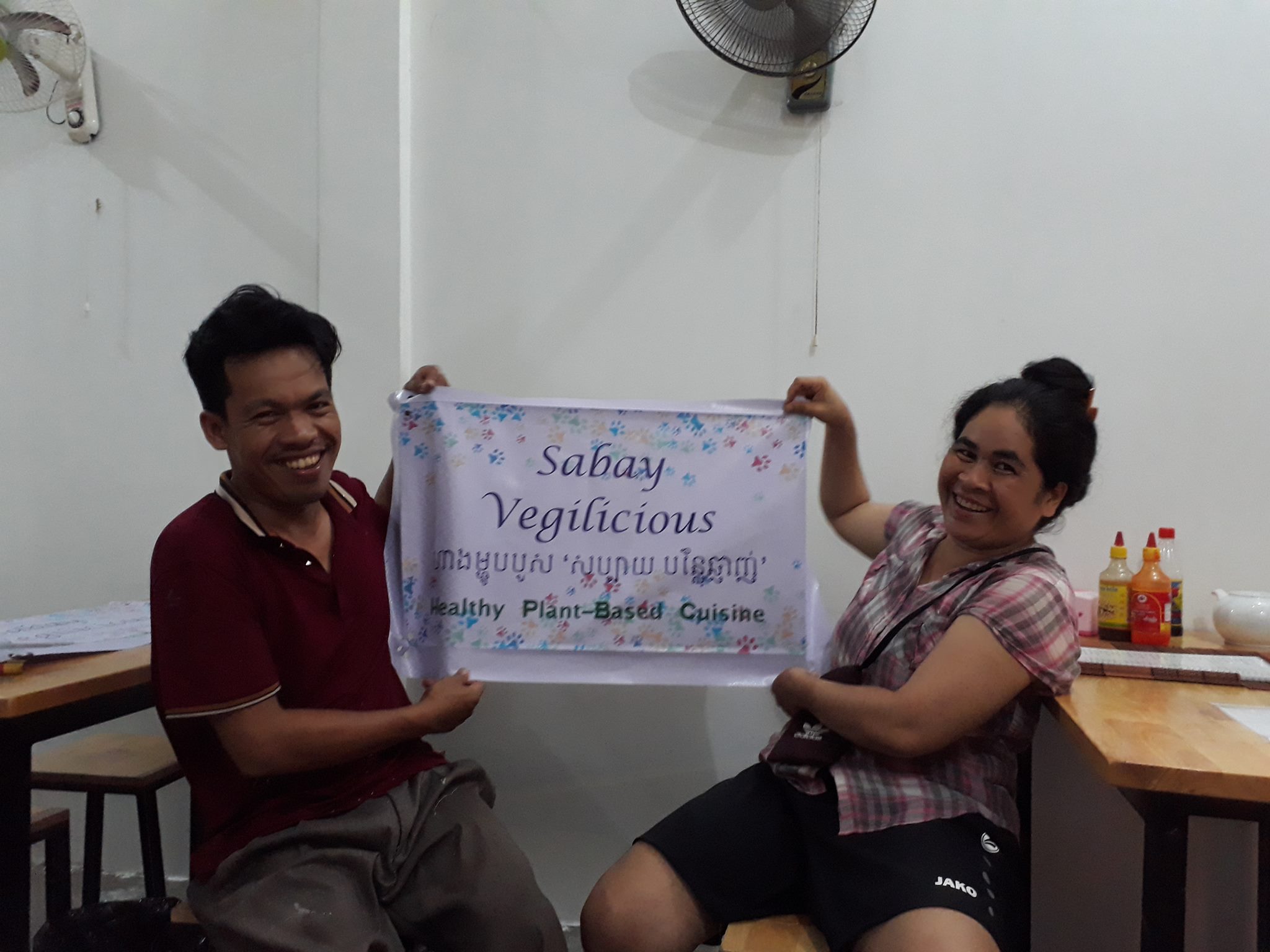 Syna and Mong finally leave the cruel dog meat trade. They were pleased to hold their new banner. There are always new dishes at the restaurant. The food looks delicious!

Dog meat restaurants are common in Cambodian cities such as Phnom Penh and Siem Reap. Ironically, most Cambodians are Buddhists. Dog meat trade brings bad luck to them. It is also against Buddhism. The couple explain themselves on Sabay Vegilicious’ Facebook page. “Frightened animals are slaughtered in extremely terrible environments, before they become curry or roasted dog meat, which costs only 2 USD. Thus, we strive to replace this sad and violent business with a nice and sympathetic one.”

With the helping hands from the Animal Hope and Wellness Foundation and its founder, Marc Ching, Syna and Mong finally have a chance to start a new business. All the equipments are sponsored by Marc Ching and his foundation. Mong is grateful to this life-changing opportunity. “Dogs are very kind and loyal to humans. They don’t deserve to be treated cruelly. Our customers are welcomed to bring their dogs to our restaurant!” he said.

Syna and Mong even realize that not only dogs should not be consumed. All animals should be treated in a humane way. They remove all animal elements from their menus and serve their customers with pure vegetables. They also invite everyone to live like vegans and have a joyful life. Hopefully there are more and more dog meat vendors follow Syna and Mong! 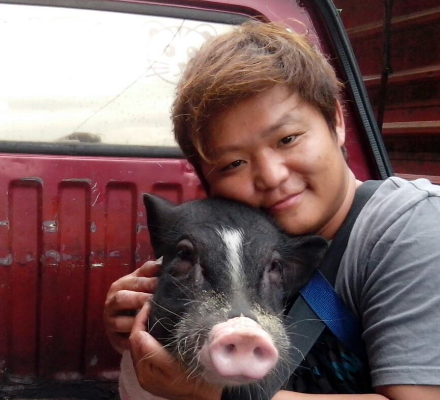 Were pigs born for human consumption? The Pig Heaven created by Luo Xiong-yin provides a completely different environment for pigs.

A long stare from a pig has changed Luo Xiong-yin’s life and nurtured The Pig Heaven with the concept of “no-killing”. Luo succeeded the pig farm from his family. There were once more than 800 pigs. One day, when he was about to send pigs to the slaughterhouse,  a pig suddenly gave him a long and sad stare. This made Luo sleepless that night.

Although Luo could not save that pig finally, he made an important decision which saves all his pigs from being slaughtered. He becomes a vegan. All his animals such as pigs, rabbits, sheep and dogs are vegans too. The Pig Heaven are now the paradise for animals. Visitors including students can realize how to live harmoniously with animals! 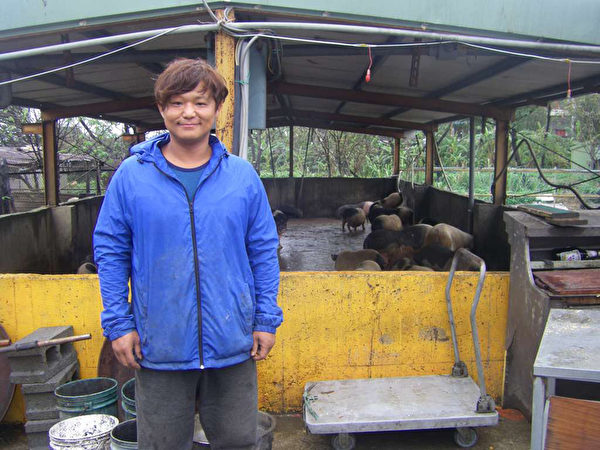 After losing income from the slaughterhouse, Luo has to do other jobs to maintain his business. This is tough, but he feels happy.