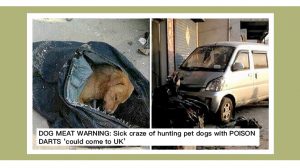 DOGS are being hunted for their meat by illegal vendors in China – and one expert has warned the sick craze could come to the UK. 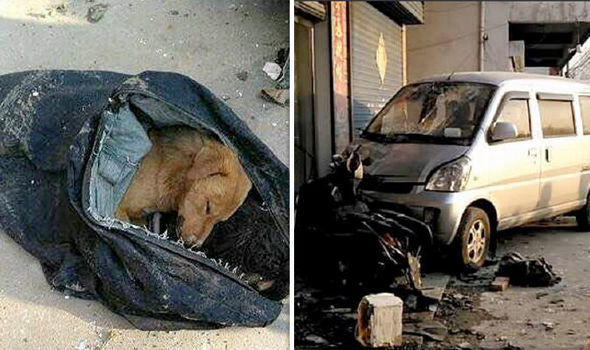 Dog meat horror: A man was killed in a car crash after he was caught killing dogs with poison darts (Image: TWITTER)

As calls grow for Theresa May to act after it was revealed it is not illegal to eat dog meat in the UK, the full extent of the gruesome dog meat market is coming to light.

In parts of Asia where eating dog is commonplace, strays, lost and stolen pets are often used as ingredients in meals.

And now it has been revealed some people are using homemade poison darts constructed using internet tutorials to kill – and then eat – pet dogs.

Chinese media recently highlighted a particularly shocking incident in which a dog hunter was caught poisoning another man’s dog with a dart before trying to take away the carcass.

After the furious dog owner stumbled across the macabre scene, the dog-killer told him: “If you dare to chase me, I’ll poison you with a dart.”

The man then sped away from the scene while the dog owner took chase.

The chase ended when the dog owner ploughed his motorcycle into the dog hunter’s, accidentally killing him.

And now a animal rights campaigner has warned dog hunting could come to the UK.

Gordon Mak, a spokesman from the World Dog Alliance (WDA), said it is “possible similar instances could happen in the UK”.

He added: “The materials required to make a poison dart are highly accessible. Guides are easy to find on the internet too.

“This is why dog meat industry brings so much harm to the society.”

Last September a restaurant owner who killed dogs for hot pots surrendered after a vigilante chased him in China. 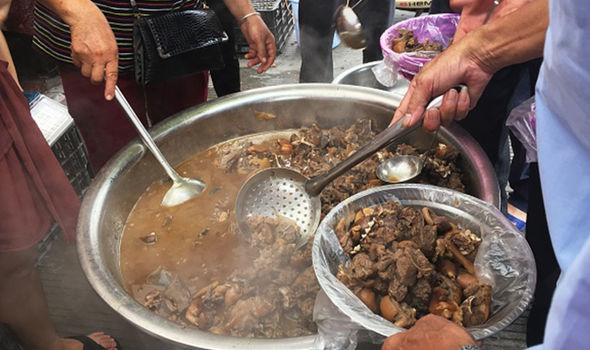 Cases of dogs being killed for meat are on the rise in the US (Image: GETTY)

Eight dog carcasses were found inside his car when police searched his vehicle.

With a burgeoning dog meat market in the West, several dog meat vendors have been arrested for selling meat in the US.

Over 30,000,000 dogs are slaughtered for human consumption every year, mainly in Asian countries.

Out of this, 70 percent are stolen pets, the WDA claims.

Half of UK households have a pet and freedom of information requests to UK police forces have found dog thefts are on the rise.

The WDA said: “We fear some of the stolen dogs have become meals for dog-eaters like many other countries.”