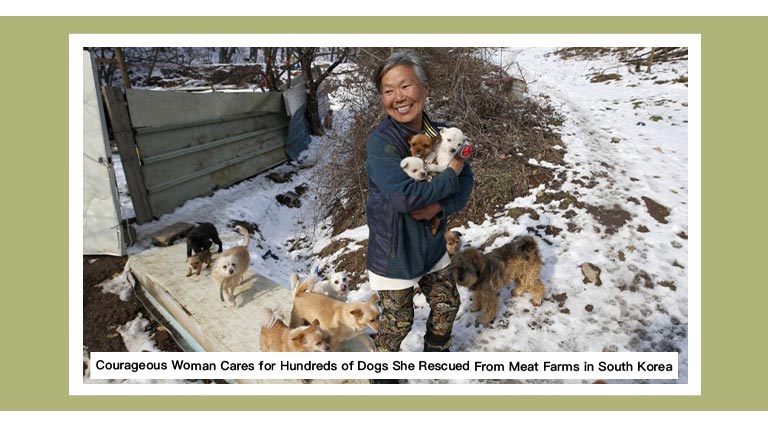 In the U.S., the thought of consuming dog meat is absolutely abhorrent. We think of these animals as beloved companions and family members and as such, we don’t categorize them as “food” animals. However, in parts of Asia, dog meat is as readily acceptable as any other.

Just like we raise cows and chickens, in South Korea, dogs are raised in meat farms where they are subjected to horrific conditions and never know anything but the tight confines of their crates before their ultimate slaughter.

Luckily, there are many individuals working to save these dogs, one being Jung Myoung Sook, a 61-year-old woman who cares for more than 200 dogs, all of whom she rescued from the streets and restaurants.

Sook has been caring for the dogs for 26 years. In that time, she has moved seven times (taking all of the dogs with her) due to neighbors’ complaints about the noise, but she’d rather move over and over again than see these dogs end up dead on the street or on someone’s plate. Sook, who gets by on a meager living cleaning a store, doesn’t have much to spare, but everything she can muster goes to caring for these rescued animals.

Sook’s work makes a huge difference for stray or lost dogs, who are typically killed for food or euthanized at public shelters. South Korea is the only country in the world known to farm dogs for their meat. The practice of dog meat consumption in Korea is a highly contentious and emotive issue, and while more animal rights activists are speaking out against meat farms, it still takes great courage to go against the traditional practice. If it were not for Sook, many of these dogs would have spent their short lives in filthy wire cages surrounded by the other frightened animals before becoming victims of the industry.

“My babies aren’t hungry. They can play and live freely here,” she told the Associated Press. “Some people talk about me, saying, ‘Why is that beggar-like middle-aged woman smiling all the time,’ but I just focus on feeding my babies. I’m happy and healthy.”

This kind woman’s efforts to rescue so many dogs from a tragic end, with the little she has, is a true testament to the power of compassion. Her courage to challenge traditions for the sake of these animals is truly admirable.