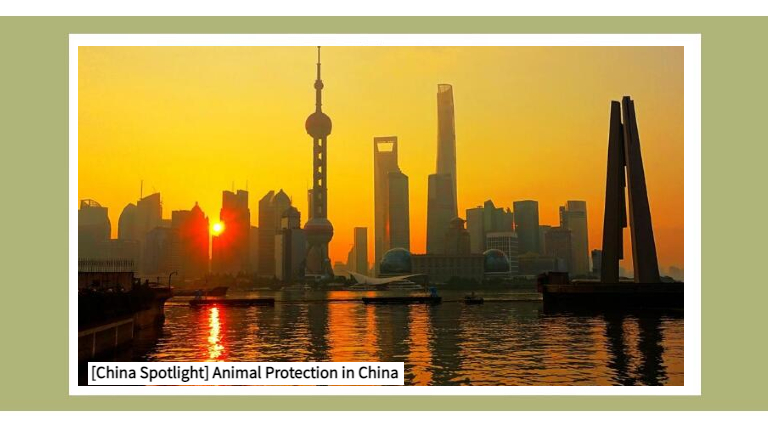 News on Animal Protection in China:

1. On January 22, 2021, the revised “Measures on the Administration of Animal Quarantine Law of the People’s Republic of China” was announced. The most prominent aspect of this amendment to the Measures on the Administration of Animal Quarantine Law is to focus on building a scientific, reasonable and sound animal epidemic prevention legal system. It has been clarified in many aspects, such as strengthening the management of stray dogs and cats, wild animal quarantine, and prohibiting live trading of livestock and poultry. The contents related to companion animals include: stipulating the law enforcement basis for dog and cat breeding and slaughter, and standardizing the management of civilized dog raising and stray animals from the perspective of epidemic prevention.

Editor’s note: At the beginning of the revision of the Measures on the Administration of Animal Quarantine Law, animal protection volunteers hoped to include a clause prohibiting the slaughter, operation and transportation of cats and dogs and other companion animals. Although it was not adopted in the end, it is still not a small improvement on the whole. The new law clarifies that the main responsibility for dog management lies with the local people’s government. At the same time, it also requires the participation of the people and mass autonomous organizations, communities, and social organizations. This coincides with the WDA’s route to promote local governments to legislate on banning dogs and cats. It is expected that more cities will learn from Shenzhen and ban dogs and cats as soon as possible.

2. Recently, there has been a rebound of the epidemic in some areas in China. Due to the needs of epidemic prevention and control, some residents need to go to designated places for centralized isolation. On January 21, when residents of Zhaotong Road, Huangpu District, Shanghai were transferred to the quarantine hotel, their pet dogs got on the bus together! Residents are quarantined and allowed to bring pets. This is the first domestic initiative and has been well received. On January 24, Beijing’s Daxing District announced at a press conference on epidemic prevention and control that it agreed to leave a family member to stay at home, considering that pets raised by some families need to be taken care of.

Editor’s note: As a companion animal, a dog is considered a member of the family. This concept is gradually moving from the private sectors to the government, and it is taken into consideration when the official policy is formulated. This is undoubtedly a huge improvement. Under the epidemic, everyone is in danger. But under fear, people’s emotions can still be taken seriously. This kind of humane thoughtfulness shows its temperature and strength in the current normalization of epidemic prevention and control.