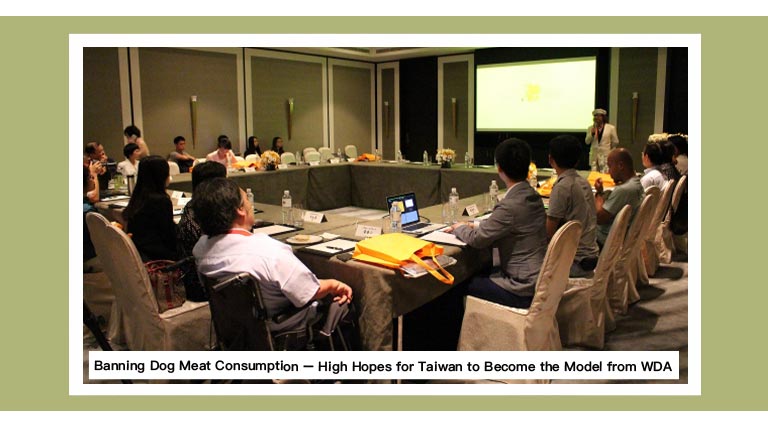 Why Taiwan? Genlin, WDA founder, states, “In 2015, WDA planned to start legislating in the West, then push forward towards Asian countries.” However, after meeting multiple large-scale animal organizations, the response he got was “This is an affair of the East not to be interfered by Western people”. However, in November 2015, he heard exhilarating news: Gaoxiong autonomously promoted legislation banning dog meat consumption!

Genlin believes if Taiwan can lead in legislation, it will be the light for Asian countries. When he made the documentary “Eating Happiness”, dog traders always used the argument “You are subservient to foreigners, this is Chinese nation’s custom, you cannot interfere our right to eat.” Nevertheless, Taiwan is also a part of the Chinese nation, a part of Asia, which will be the most powerful way of convincing dog eaters.

Dog meat hunted down and seized by animal activists. Not many people eat dogs and cats in Taiwan. Photos from Tanews (provided by Xu Man Hui).

Although the general Taiwan community do not eat dogs and cats, it is hard to imagine that before the “Animal Protection Laws” were passed in 1998, there were still dog meat restaurants. Wang Li Ling, president of Help-Save-A-Pet Fund Taiwan, recalls that they used to take care of stray dogs under the Fu He bridge, but under another bridge was a dog meat restaurant with red lanterns. “No legislation, no justice” she exclaims. At first, animal organizations can only use “stupid means”, with activists talking people out of eating dogs in front of dog meat restaurants. The situation improved only after Animal Protection Laws were passed.

Zeng Hong Yi, Legislative councilor Lin Dai Hua Congress office director states, the current “Animal Protection Law” only bans the source, slaughtering dogs and cats, but not the tip, consumption itself, which is a loophole. Legislative councilor Wang Yu Min’s bill passed the first reading on 22nd April, 2016, amending Animal Protection Law Section 12, adding banning consuming and being in possession of products derived from dog and cat caresses and viscera. The fine has been raised to 50-250 thousand Taiwan dollars (around 1500 – 7500 USD). Committee for Economic Affairs will combine this with Legislative councilor Chen Yi Jie’s bill and examine it. If not controversial, it can be passed in a short period of time.

WDA plans to publicly screen their documentary “Eating Happiness”, with a detailed description of the dog eating phenomenon in Asia.