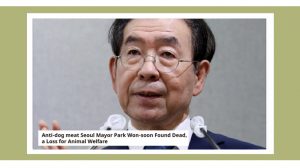 Police in the South Korean capital Seoul have found the body of the city’s mayor after he went missing on Thursday. Mayor Park Won-soon was an active advocate against dog meat trade. Last year in October, Park vowed to close all dog butcheries in Seoul and made the announcement to an audience after a screening of an animated film about abandoned dogs called Underdog.

Park vowed to close all dog butcheries in Seoul in February 2019 and made the announcement to an audience after a screening of an animated film about abandoned dogs called Underdog.

In October 2019, Seoul was declared free of dog slaughterhouses after the last three meat shops in the city agreed to stop killing canines for food.

Who is behind the ban on Korea’s largest dog meat market?

On 12 September, 2016, the British Parliament passed a resolution after four hours of debate, confirming the decision that the UK will negotiate with the South Korean government diplomatically to ban the use of dog meat. This practice directly led to the decision of Li Jae-ming, the mayor of Seongnam City, South Korea on December 12 to shut down the Peony market, the largest dog meat market in Korea.

Why did the UK pay attention to the problem of eating dog meat in South Korea thousands of miles away? This resolution was passed, and it was of great significance. Who is behind the scenes?

As the only organization that promotes “Explicit legislation against dog meat consumption” in Asian countries, WDA has joined the British animal protection organization through a series of plans and activities, including through Facebook and Twitter promotion, since February 2016. And so on, WDA launched online signatures, reaching 3.8 million readings, and obtained 100,000 British signatures. In the United Kingdom, it is stipulated that the right to sign jointly by more than 100,000 people must be entered into by Parliament. Therefore, it has successfully promoted the British Parliament’s call for South Korea to ban the eating of dogs and cats.

British MP Paul Monaghan emphasized: “As we have heard, the World Dog Alliance has produced an important analysis of this lucrative trade across Asia.”

The mayor of Seongnam City, Lee Jae-Ming, stated that the ban on the sale of dog meat is not only for animal rights, but also to reverse South Korea’s reputation in the international community.

The following is the timing of the relevant process:

On January 31, 2016, Genlin, the founder of WDA, began planning to discuss a joint signature in the British Parliament to require South Korea to ban dog meat.

On February 9, 2016, WDA published a petition on the parliament page through the largest PR company in the UK

From March 8th to August 1st, 2016, advertising was carried out through the most widely used social media in the UK, including facebook, twitter, and Instagram. It was circulated by 4 million British people and reposted by more than 100,000 people.

On April 7, 2016, 10,000 signatures were finally obtained. The British government stated that it would pay attention to the development of the Korean government in the 2018 Winter Olympics

On August 8, 2016, it is estimated that a total of 102,131 British co-signatures were obtained, and it was announced that it will be discussed on September 12

On 8 September 8, 2016, the British Parliament discussed the conclusion of Korean dog meat, which aroused the voice of the media, celebrities and animal protection organizations.

On 12 September, 2016, the British Parliament held a discussion seminar in Westminster Hall and invited a number of foreign affairs officials. They said that they would discuss with the South Korean government through the British unit. The relevant discussions aroused interviews by mainstream British media including the Mirror, Daily Mail, The Sun, etc., reveal more about dog meat in Korea.

On 4 December, 2016, the Mirror cited the Congressional discussion initiated by WDA and the campaign of the 2018 Winter Olympics to go deep into South Korea and continue to expose the Korean dog meat market, allowing the Korean government to tackle the dog meat trade.

On 12 December, 2016, Seongnam Mayor Lee Jae-myung announced that he had reached an agreement with the representative chamber of commerce in the Moran Market, the largest dog meat market in Korea, not to slaughter dogs.

South Korea is the hardest hit area for dog meat consumption, with about 5 million dogs being eaten every year, most of which are so-called “meat dogs” from farms.

Genlin, the founder of WDA, made a special trip to South Korea to investigate a local dog meat farm in order to shoot the documentary film “Eating Happiness”. The “meat dogs” inside have never left the iron cage from the moment of birth to the moment of being slaughtered, or breathed fresh air. In contrast. Even the chickens raised on the farm can walk around freely outside, which is a sharp contrast between “fowls” and “dogs in cages”.

What they eat every day is the leftovers that the farm owner wants to return from the restaurant for free and have been kept for a whole week. The entire dog meat farm is filled with the smell of these smelly food and dog feces, and most people cannot stay in it for more than 5 minutes.

South Korea is a country with the most in-depth research on dog meat. Koreans not only eat dog meat, but also use dog fur, grease, internal organs, and bones to make various products: leather goods, spirits and skin care products.

South Korea’s dog meat problem has always been criticized by the international community. In 1988, Seoul hosted the Olympic Games. The government ordered all dog meat restaurants to be rushed to the suburbs. “Dog meat soup” should be renamed “Nutrition soup” to avoid being discovered by the outside world. But after the Olympics, the dog meat industry in the city center immediately revived.