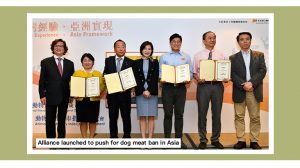 Alliance launched to push for dog meat ban in Asia

Alliance launched to push for dog meat ban in Asia 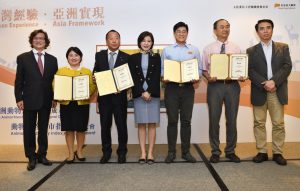 An international alliance was launched in Taipei on Thursday aiming to push Asian countries to outlaw the slaughter of dogs and cats for human consumption and to end the dog meat trade in places that include Japan.

Genlin Peng, founder of the Asian Animal Friendly Alliance, said the focus of the alliance for now is to lobby state legislators in Asian countries to amend or enact their legislation to outlaw the practice.

“More than 30 million dogs are slaughtered for human consumption in Asia annually, 70 percent of which are stolen,” he said. “Among the 30 million, 15 million are in China, 7 million in South Korea and 5 million in Vietnam.”

Although the vast majority of Japanese do not eat dogs, there are more than 100 restaurants or stores in Japan selling imported dog meat, mainly to foreign consumers, according to Kusuo Oshima, a member of the House of Councilors in the Japanese Diet who was also present at the launching ceremony.

Statistics compiled by the World Dog Alliance founded by Peng showed that Japan imported about 450 tons of dog meat between 2002 and 2016, equivalent to 100,000 dogs.

Oshima, who questioned Japanese Prime Minister Shinzo Abe on the legislative floor last year about the possibility of a ban, last month presented Abe a letter from former U.S. congressman Jeff Denham, who urged Abe to stand together with the United States to impose a ban on the dog meat trade.

The US Congress last December took action against the dog meat trade, which Denham described as “an evil that has gone all but unnoticed for years.”

Taiwan’s legislature passed legal revisions in April 2017 banning the human consumption of dog and cat meat and raising the maximum fine for animal abuse. That came just two months after euthanasia of stray animals was banned.

The successful legislation in Taiwan and the United States has given Peng a big boost in his global campaign of banning the dog meat trade.

He has visited state lawmakers in Britain, Italy, Norway, France and China to convince them to pass legislation banning the practice.

The alliance launched on Thursday currently consists of two legislators from Taiwan, two from Japan including Oshima and one from Hong Kong.

As the 2020 Tokyo Olympics is approaching, Peng said he hopes Japan will follow in the footsteps of Taiwan and the United States to ban the slaughter of dogs and cats for human consumption and the dog meat trade before the games begin.