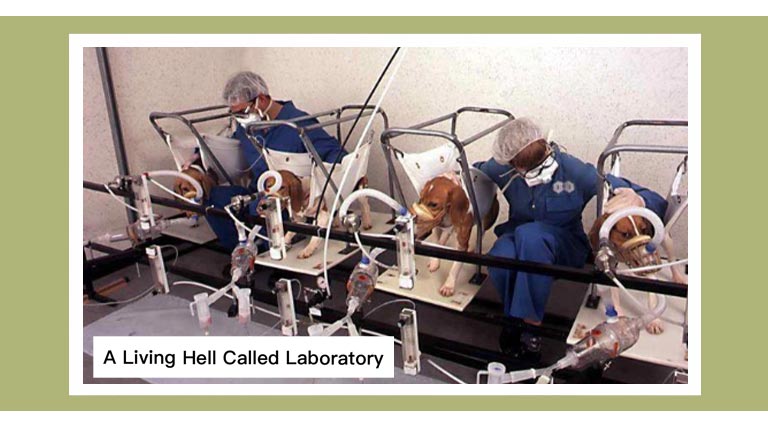 Most laboratory beagles are trapped in cages from birth to death. They never get a glance at the sky beyond the concrete walls and steel bars.

Greyhounds in Macau spend their whole life in the racing track, not knowing what love and living with family feel like, while beagles are a preferred breed for experiments because of their “good behavioral characteristics, size, and other physical traits” as well as their “docile temperament.” Some never get a chance to feel the softness of soil and breath fresh air outside of the lab. All sacrificed for human medication.

Laboratory dogs have existed over a century to serve as human substitute for anatomical research which involved disemboweling. Beagle first became the subject of choice since 1951, begun by University of Utah in the U.S.. In 1952, the college initiated a breeding program. By 1955, they had managed to produce 309 beagles, stuffed inside a kennel that could only fit 200 dogs. There are 383 laboratories in the U.S. Each laboratory owns approximately 70,000 dogs. Of those, 96% are beagles. The demand enabled the establishment of a breeding industry of beagles.

What kind of experiments would use beagles? By 1960, over 670 had been deployed in tests of radioactive poison in University Utah. The subjects were injected with the radioactive chemical element plutonium to research pathological changes caused by chemicals. The results were malignant tumors, tooth loss and fractures. The beagles lived in pure suffering and pain day after day, not even given the option of euthanasia.

Until recent years, beagles are still used in anti-cancer drugs development and laparoscopic surgery research. Some are forced fed, injected and coated in pesticide and chemicals for safe-test purpose; some are forced to smoke 30 tobaccos a day to see how their lungs. The docility of beagles are deemed the most ideal companion animals by many, but it also makes them perfect as subject experiments.

Using beagles as laboratory animals has become a global phenomenon. A conservative estimate shows that 60,000 beagles are used in the U.S. laboratories. The huge and professional demand has made the breeding of beagles lucrative. . The biggest laboratory beagle supplier is Marshall Bioresources. It incorporated by supplying  ferrets. In 1962, it saw the potential of beagle business and began breeding. Marshall categorizes beagles in two types. One for human drug development, the other one for animal drug and vaccine development.

It is difficult to conclude the exact number of laboratory beagles used and the number of death annually. They are trained to accept blood collection and injection without a doubt. The animal welfare organizations in the U.S. promoted the Beagles Freedom Bill, which allows adoption of retired laboratory beagles. It was a small step against the industry.

To stop laboratory beagles from barking, the researchers remove their vocal cords. They can only suffer in silence.

We urge laboratories to adapt the 3R principles: Replacement, Reduction and Refinement to minimize the amount of lab animals and suffering.