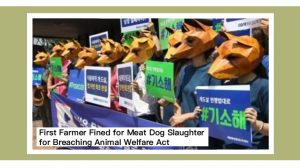 Dog-masked, members of CARE made a “Dog Slaughter Prohibited” declaration on 20 June in front of the Sokcho Branch of Chuncheon District Court.

Animal Rights Organization: Other animal issues too should resort to law. 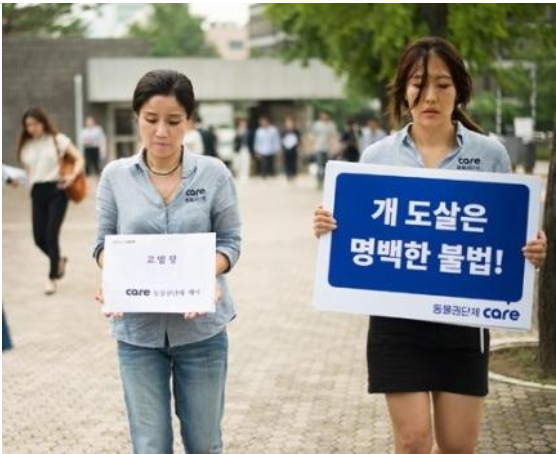 Care continued that a Bucheon dog farm owner was sued for killing a dog with electric shock. The trial started in Incheon District Court Bucheon Branch on April 16 in and resulted in a fine of 3 million won imposed on the owner.

Care added that the owner was found guilty of breaching the Animal Protection Act and the Livestock Products Sanitary Control Act for unnecessary killing of animals, a precedent in the South Korea.

The Animal Protection Act is complemented by the Livestock Products Sanitary Control Act that killing animals is illegal except “the animal has become a clear threat to human lives or properties” or “necessary circumstances”.

Law only punished “brutal slaughtering of dogs” or “dogs killing in front of other canines”, which were ineffective in eliminating the act of dog killing. 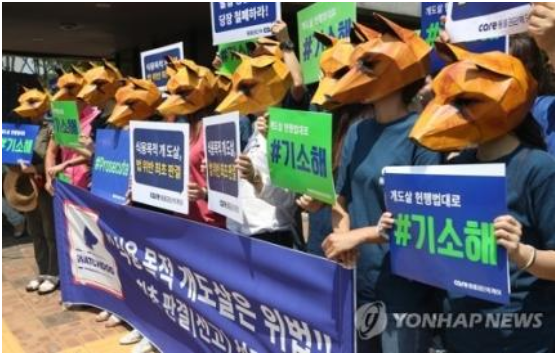 CARE sued the owner using the instance belonging to “Unjustified killing of animals” in the Animal Protection Act and submitted evidence. Today the accused was finally found guilty. All members of CARE have welcomed the judgement.

CARE held a press conference the next day. The representatives mentioned their other legal actions against other dog farms countrywide. The courts responded with “no prosecution action”. CARE is making appeals, hoping that the judgement of the Chuncheon District Court has caused profound impact..

CARE will work with What’s Dog in locating dog farms and dog meat factory to bolster the legislation against dog meat consumption.