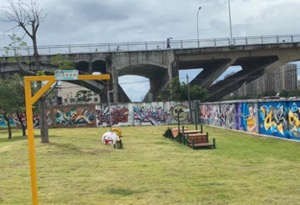 Zhuhai, the Animal-friendly City in China

According to the Pet Industry White Paper, the number of pet dogs in China was 54.29 million in 2021, an increase of 4% year-on-year. The growing number of pets has been accompanied by a number of neighbourhood disputes and law cases arising from uncivilised dog-keeping behaviour, such as not walking a dog with a leash and pet dogs injuring people.

The Zhuhai government has given a good answer to this problem.

Since last year, seven pet parks have been created in Zhuhai and are open to the public free of charge. In addition, there are pet parks in Hengqin, Xiangzhou and Jinwan, each of which is under planning. These exclusive parks, where pets can have fun, have attracted many dog owners to come and play.

The Doumen Daxin Binjiang Pet Park in Zhuhai, which has just been opened, covers an area of 1,300 square metres and is divided into an activity area and a living area for dogs. The activity area is equipped with training facilities such as dog jumping rings, dog football and adventure bridges, while the living area is equipped with living and resting facilities such as pet toilets, washbasins and leisure seats for the public.

The construction of the pet park is part of the deepening of civilization in the city. In addition to enhancing the public’s awareness of civilised dog ownership, it also creates a more loving, warm and civilised atmosphere in the city.

The founder of the World Dog Alliance (WDA), Genlin, was a businessman in his early years and the centre of his business and philanthropy is located in Zhuhai. As one of the earliest special economic zones, Zhuhai enjoys the local legislative power granted by the National People’s Congress (NPC), and in 2020, Zhuhai joined Shenzhen in explicitly legislating against the consumption of dog and cat meat, setting the first benchmark for local legislation against the consumption of dogs and cats in China.

In April 2019, the Animal-Friendly Index, developed and compiled by the WDA, was released to evaluate whether cities are animal-friendly and provide adequate protection for companion animals in terms of laws and regulations, administrative governance, friendly facilities and community organisations. Four cities, including Kyoto in Japan, were awarded the inaugural Animal Friendly Cities award.

It is believed that Zhuhai has been included in the WDA’s study. Zhuhai has been awarded the title of ‘China’s Happiest City’ by the United Nations Habitat for Humanity. We have every reason to believe that Zhuhai will win the Animal Friendly City crown!