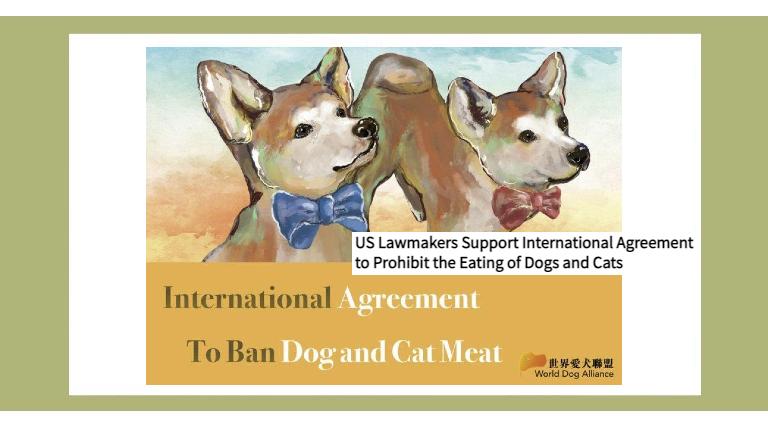 World Dog Alliance: US Lawmakers Support International Agreement to Prohibit the Eating of Dogs and Cats

Soon after his inauguration, U.S. President Biden signed a number of executive orders and bills to bring the United States back to a position of world leadership. The two U.S. congressmen who championed the “Prohibition on slaughter of dogs and cats for human consumption” legislation in 2018 shared their expectations with the World Dog Alliance for the Biden administration to initiate the International Agreement to Prohibit the Eating of Dogs and Cats.

U.S Congressman Alcee Hastings, a leading figure in the “Prohibition on slaughter of dogs and cats for human consumption” legislation, has proposed many bills and resolutions condemning the consumption of dog and cat meat. In September 2019, Genlin, the founder of the World Dog Alliance, presented the Golden Dog Award to Congressman Hastings in recognition of his contribution to animal welfare.

Congressman Hastings spoke highly of the World Dog Alliance’s efforts in China and Japan. He was particularly encouraged by the Chinese city of Shenzhen passing legislation to ban the consumption of dogs and cats: ” Shenzhen becoming the first Chinese city to outlaw the dog and cat meat trade is an important step in the right direction, especially since Shenzhen has historically been a city to pilot reforms that are later implemented by all of China. As I have done throughout my career, I urge China and all countries with similar practices to initiate a ban on the dog and cat meat trade. ”

U.S Congressman Rodney Davis, another recipient of the Golden Dog Award, is a known dog lover and an advocate for banning the consumption of dog and cat meat. He believes it was a crucial first step when 34 Japanese congressmen jointly signed a letter urging Prime Minister Suga Yoshihide to initiate the International Agreement to Prohibit the Eating of Dogs and Cat, and said: ” I am glad to see other global leaders engaging more on this issue and working toward ending the human consumption of dog and cat meat. ”

″ I hope that this International Agreement is prioritized by the Biden Administration and am optimistic that this can be a topic of negotiations in future trade agreements as we seek to enhance trade relations with other countries, ” said Congressman Davis.

In February 2020, Congressman Hastings and Davis along with 30 other congressmen from both the Democratic and Republican Parties jointly signed a letter to former President Trump calling on him to support the International Agreement to Prohibit the Eating of Dogs and Cats advocated by the World Dog Alliance. The letter received a handwritten reply by Sonny Perdue, the former United States Secretary of Agriculture, which expressed the government’s full support to promote the signing of the International Agreement by the United States, China, and Japan.

“It is critical that other countries work together to raise awareness of this issue and garner public support around ending the consumption of dog and cat meat.”

“The World Dog Alliance has my full support in their efforts to urge governments in the U.S., China, and Japan to sign onto the International Agreement and I join them in these efforts.”

Genlin has faith in the Biden Administration, “President Biden has promised to bring the United States back to the Paris Agreement; he has also stated that he would restore the tradition of the White House’s ‘first pet’, which demonstrates his care for animals, the environment, and international cooperation. I hope he will introduce the International Agreement to Prohibit the Eating of Dogs and Cats when discussing the Paris Agreement with leaders of other countries, so the world can work together to improve animal and environmental protection.”