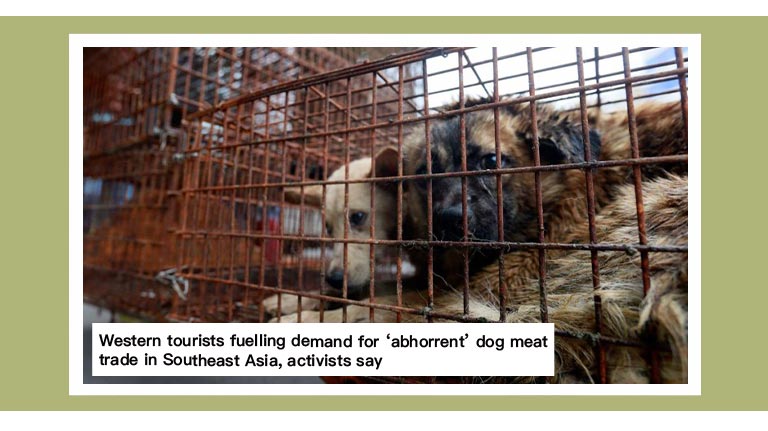 The Soi Dog Foundation, which campaigns against the practice in Vietnam, China and South Korea, said what would be a waning tradition is being fuelled by foreign consumers.

John Dalley, the charity’s co-founder and vice president, toldABC News that the animals are clubbed to death “if they are lucky” but others are strung up and skinned, burned or boiled alive.

“The cruelty is abhorrent. There is literally no method to the slaughter, it’s almost madness,” he said.

“What we are seeing more and more of is tour guides in Vietnam, pushing Western tourists to try dog meat, because it is a cultural thing.

“Tourists are not realising what the dog has gone through and also the danger they are putting themselves in – the health issues are real.”

Rabies has been found in dog meat, although it cannot transmit the disease to humans, and it has also been linked to outbreaks of cholera.

An estimated five million dogs are eaten in Vietnam every year and 2.5 million in the Korean Peninsula, while activists believe 70 per cent of those are stolen pets.

Celebrities including Ricky Gervais and Dame Judi Dench have appeared in a campaign video by the Soi Dog Foundation to raise awareness of the horrific trade.

Warning: Some viewers may find scenes in this video distressing

“I didn’t know that these innocent creatures are crammed into cages so brutally that their bones almost break, so tightly that they can’t move,” Dame Judi said.

“They’re trapped like this for the smuggled journey, which can take days.”

Footage filmed by activists shows dogs being thrown into cages where they are left starving and crying, before being stacked on to lorries for transport.

Many are crushed or suffocated on the journey, while others starve or die of thirst.

Some abattoirs boil the dogs alive because of the belief that the adrenaline released during pain tenderises the meat.

Authorities are cracking down on the trade in dogs for meat and skin in Thailand, which is often linked to organised gangs exporting to Vietnam and China.