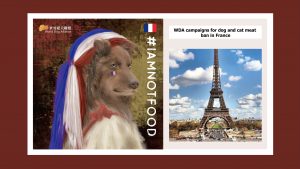 WDA campaigns for dog and cat meat ban in France

On 7 January, 2019, Typhanie Degois, the youngest congresswoman in French history and a party member of French President Macron, invited WDA to a meeting to discuss legislation strategies. As the vice-chairperson of Animal Protection and Welfare Ministry in France, she admires WDA’s philosophy and hopes that WDA can keep her posted on the legislation progress around the world.

To help Ms. Degois better understand WDA’s work, our team translated over 50 pages of documents and more than 30 videos into French. Ms. Degois was impressed by how WDA’s founder Genlin spearheads campaigns in different countries and donates to animal protection groups to save animals.

Awareness of animal protection in France by no means fall behind other European and American countries. French people do not eat dog meat; like Germany, there should be little resistance to a law prohibiting dog meat. However, some French people believe that if they do not eat dog meat, there is no need for a ban. A lack of law may result in a grey zone that allows foreigners to legally eat dog meat in France, similar to the situation in Italy where new immigrants kill and eat dogs and cats. To close the loophole, France, along with other European and American countries, should expressly legislate a ban on dog and cat meat.

As a leading figure of animal protection in France, Ms. Auloy is surprised that France does not have a law banning dog meat. Much like some people in France, she initially believed that a law is not necessary. WDA clearly pointed out that having no law that prohibits dog meat may encourage foreigners to eat dog meat in France, like the situation in Italy. Ms. Auloy later admitted that an absence of dog meat ban in France was a mistake, and expressed hope that WDA and La Fondation Brigitte Bardot could cooperate closely in the future.

Ms. Auloy pledged support to WDA’s campaign and promised to persuade French politicians to legislate a ban on dog meat. Over the years WDA has built up its reputation under the leadership of Mr. Genlin; it opens up more opportunities for us to meet and work with animal welfare groups in other countries.

Joined the French animal protection alliance CAP, WDA will go to France to meet with them every month, and will explain the latest information about the global legislation prohibiting dog meat. CAP is responsible for contacting legislators who are interested in legislation prohibiting dog meat. The two sides have worked closely together to ensure that France, following the United States, Taiwan and other places, becomes a place where the law prohibits dog meat.

In August 2019, British MP Giles Watling took the time to meet at Genlin’s Castle in France and talked about the world’s animal protection situation. Both parties are disappointed that the current global animal protection laws are not comprehensive enough, and they all hope to implement international conventions to save the world’s dogs and cats.

This is the first time that WDA has met and discussed in detail with non-local councillors in France, and it is also the first time that councillors have been invited to the castle for short meetings. As the saying goes, it’s a pleasure to have friends from afar. Genlin prepared a one-month arrangement for Senator Watling’s coming this time, waiting for Senator Watling’s visit with anticipation.

This non-official visit by Congressman Watling to the residence of Genlin in France showed his affirmation of WDA and his appreciation of the concept of WDA. Parliamentarian Watling praised the founder of WDA, Genlin, for being an unprecedented one on the issue of fasting dog meat. He hopes that WDA can implement international conventions around the world in the future, and will fully support WDA’s global prohibition of dog meat.