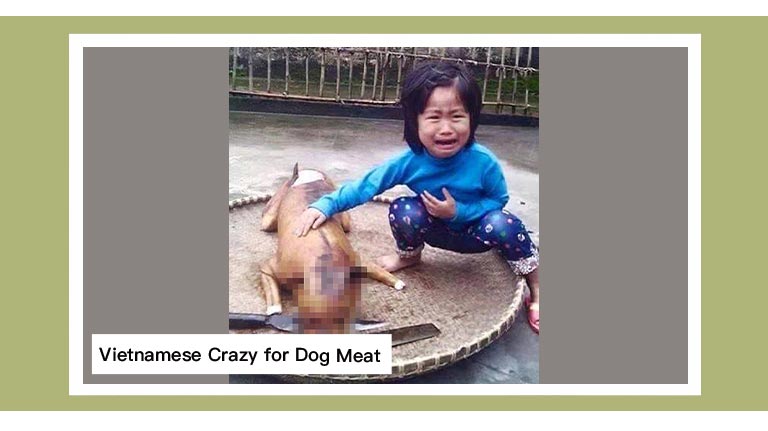 80% of Population Fond of such “Cuisine”

The annual dog-slaughtering festival is coming. Every year during this appalling 10-day event, streets of Yulin are paved with dying dogs and butchered corpses. You will be, however, shocked to find out that killing and eating of dogs in Vietnam is so much worse even Chinese immune to cruelty of Yulin Festival are no match.

This photo once went viral in the internet, evidently showing the gravity of dog meat issues in Vietnam. When the 5-year girl found her stolen dog “Fafa,” it had already been cooked for consumption. She could not help but cry, petting its dead body. Dog-eating in Vietnam has been reported many times by Chinese social network media with photos and detailed descriptions. They all contain one message, “there are over 300 dog meat restaurants in the capital of Vietnam Hanoi alone.”

Dog meat restaurants are found everywhere in Vietnam. The prosperity of the industry grows thanks to the high demand in dog meat. Similar to the situation in China, the largest meat source relies on theft. Dog stealing does not only happen locally. There are live dogs smuggled across the border. Of those, 200 thousands carry collars on their necks. During transportation, the smuggled dogs experience dehydration, crowd crush, and biting from each other. Some of them are skinned alive, burned alive, and gutted alive upon arrival until death finally ends their lives full of fear.

Vietnamese love dog meat. Genlin, Founder of World Dog Alliance, brought up that the world puts China and South Korea under the spotlight when it comes to dog meat, but the dog-eating populations are actually 20% and 60% respectively. In Vietnamese, however, 80% population, including females, consume dog meat on a regular basis. The annual consumption reaches approximately 5 million dogs. 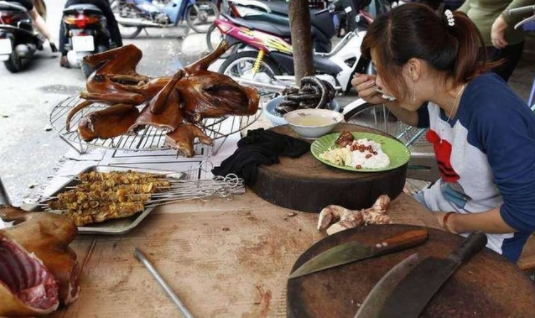 In World Dog Alliance’s film Eating Happiness, a documentary that explores the dog meat issues in Asia, a table of Vietnamese men drink and engulf chunks of dog meat as they reveal the foundation of their great fondness toward canine flesh, “Dog meat strengthens masculinity.” Some dog meat eateries promote sales by claiming, “Dog meat turns luck to your favor.” 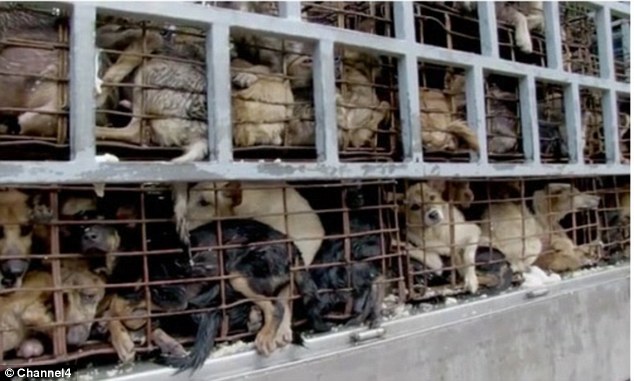 Dog meat is deemed “cheap gourmet” priced at about 200 thousand Vietnam shields (~9 US dollars). Consumer spending in dog meat restaurants is not much. Sellers often force-feed dogs to inflate their weight, which translate into money, causing even more unnecessary suffering. Worse still, dog butchers would torture their victims with brutal beating and bloodletting by the throat under the superstition that “pain makes the meat better.” They are hung high, tormented alive in the most inhuman ways one could imagine.

Vietnamese rationalize dog-eating as “ethnic customs.” Even an official of health department claimed, “We should always reserve our customs of dog-eating, so should South Korea and every country. Every custom deserves respect.” The public categorizes dogs into pets and livestock. They eat dogs even though they raise theirs as household pets.

Animal welfare organizations are desperate and helpless against this nation of dog-eating. Their only hope is to seek support from Thailand, a country that promotes Buddhism, to at least eliminate smuggling of dogs and take this supply chain off Vietnam. Ricky Gervais and Dame Judi Dench petitioned King of Thailand in 2014, hoping to end dog meat trade inside the border. It received 500 thousand signatures, but the influence was insignificant. Dog smuggling involves billions of Thai baht. The jaw-dropping profits brew corruption in customs house.

Many Vietnamese workers immigrate and spread their cruel practice around the globe unpunished, as countries lack specific legislation against it. This is the very reason that World Dog Alliance promotes “Explicit Legislation against Dog Meat Consumption.” We hope, one day, Vietnam would abandon their dog-eating practice to become a civilized country.