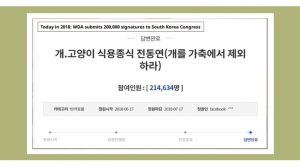 On 20 June, 2018, South Korean Congressman Pyo Cangwon submitted to the congress to amend the Animal Protection Act, prohibiting the slaughter of dogs and cats for food, and received joint support from 200,000 people at the Blue House.

South Korea is the hardest hit area for dog meat consumption, with about 5 million dogs being eaten every year, most of which are so-called “meat dogs” from farms.

Genlin, the founder of WDA, made a special trip to South Korea to investigate a local dog meat farm in order to shoot the documentary film “Eating Happiness”. The “meat dogs” inside have never left the iron cage from the moment of birth to the moment of being slaughtered, or breathed fresh air. In contrast. Even the chickens raised on the farm can walk around freely outside, which is a sharp contrast between “fowls” and “dogs in cages”.

What they eat every day is the leftovers that the farm owner wants to return from the restaurant for free and have been kept for a whole week. The entire dog meat farm is filled with the smell of these smelly food and dog feces, and most people cannot stay in it for more than 5 minutes.

South Korea is a country with the most in-depth research on dog meat. Koreans not only eat dog meat, but also use dog fur, grease, internal organs, and bones to make various products: leather goods, spirits and skin care products.

South Korea’s dog meat problem has always been criticized by the international community. In 1988, Seoul hosted the Olympic Games. The government ordered all dog meat restaurants to be rushed to the suburbs. “Dog meat soup” should be renamed “Nutrition soup” to avoid being discovered by the outside world. But after the Olympics, the dog meat industry in the city center immediately revived.