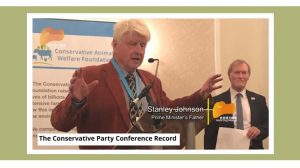 The Conservative Party Conference was successfully held in Manchester. I feel lucky to be invited to such an important event since Conservative Party is the governing party in the United Kingdom. This invitation also strengthens WDA’s reputation in the country.

The political drama has been bothering the Conference. The Supreme Count made a verdict that it was unlawful to prorogue the Parliament, right before the Conference started. There was a fear that the event would be cancelled. Even if it was held as scheduled gradually, some ministers had to remain in London for Brexit.

The Conference lasted for four days. As invited by Conservative Animal Welfare Foundation (CAWF), I participated into the event on 30 September and 1 October. Our lobbyists and I drafted a list of targets, including ministers in Department for Environment, Food and Rural Affairs (DEFRA).

Ministers have very tight schedules as they are required to speak in various venues. This makes us quite difficult to speak to ministers directly. To tackle this problem, we have to be very familiar with their schedules and wait outside the venues. Ministers usually have a very short period of free time when they are heading to the next venues. This is our best opportunity to “hijack” ministers and speak for our cause.

We quickly found Environment and International Development Minister Zac Goldsmith. The good-looking minister is a political star. His cordial character gives me a feeling that he is willing to listen to opinions. He claimed that the legislation has never stopped, and he personally supports it. He addressed to our concerns with concrete actions. We quickly received an invitation from his assistant to a meeting to discuss how the legislation could be done. In general, Minister Goldsmith is a doer of good.

We were very lucky to have a conversation with Carrie Symonds. Miss Symonds is not a cabinet member, but she plays a crucial role in legislation. She is the girlfriend of Prime Minister Boris Johnson, who can speak to him directly. She is a dog lover, and always talks about her dog Dilyn. As a former special adviser (SpAd), Miss Symonds is very interested in social issues, especially animal welfare. She particularly mentioned that she was very surprised after reading the article from the Sun. She was disappointed that Ministry of Justice (MoJ) rejected the legislation in the fear of offending Asian cultures. Miss Symonds claimed that she spoke to the Prime Minister, and the Prime Minister passed on her concerns to Lord Chancellor and Justice Secretary Robert Buckland. Our lobbyists later received a phone call from Peter Cardwell, MoJ SpAd, claiming that this government never rejected the ban.

It is great to meet with people who are supportive to our campaign, including No 10 SpAd Declan Lyons. Mr Lyons was the SpAd of former Environment Secretary Michael Gove. DEFRA was not responsive to our cause in the beginning. Mr Lyons was crucial to change the government’s mind. We also met with our champion Giles Watling.

We had a chance to say hi to Tom Newton Dunn, Political Editor from the Sun. Mr Newton Dunn has written several articles about our campaign from the political aspect, which has raised discussions among British people. His latest article on MoJ’s pushback even drew Prime Minister’s attention.

Our lobbyists and I attended CAWF’s event in the evening and were invited to give a speech at the event. It is our honour to speak in front of important people, including Foreign and First Secretary Dominic Raab, veteran MP Sir David Amess, Prime Minister’s girlfriend Carrie Symonds and his father Stanley Johnson. I also introduced our campaign to Sir David Amess and another MP Andrew Rosindell after the event.

I saw Stanley Johnson again at the venue next day. Mr Johnson was a member of European Parliament (MEP), who is very interested in the welfare of farm animals. He also has concerns on dog meat consumption in South Korea.