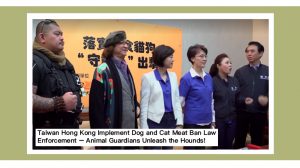 On 11 Mar, Legislative Yuan of Taiwan passed the amendment of the 12th section of “Animal Protection Law”, clearly stating that eating and slaughtering dogs and cats, buying and selling their carcasses, is illegal. This is not only joy to animal activists, but also received compliments from international media. However, the law itself is not sufficient. In order to assist on implementing the law, Hong Kong based World Dog Alliance (WDA) and Taiwan’s Not Only Environment (NOE) collaborated on setting up “Animal Guardians”, which will take the initiative to report relevant cases.

World Dog Alliance Founder, Genlin, was the first to give a speech. With an inductive tone, he thanked the Congressmen and Congresswomen for amending the law, this “composed a new chapter for Asia’s civilization and opened up a new trend for Asia’s progression”, changing the miserable fate for the 30 million dogs that are eaten every year in Asia.”

Genlin pointed out that when World Dog Alliance is promoting “explicit legislation banning dog meat” in Asia, especially in China, the most frequently received challenge is that “the Chinese Nation has the habit of dog eating for thousands of years, why are you patronizing Western values?” Taiwan’s legislation bestowed World Dog Alliance with a divine shield.

Paying close attention to the legislative progress, World Dog Alliance spread the news worldwide via social media on 11 Apr, shortly after legislation banning dog meat consumption was passed. The post has now received over 1 million views, likes and comments. This is certainly “A small step for Taiwan, a big step for Asia.”

Genlin proceeds, “WDA thinks legislation is important, but implementation of the law is even more important. The main goal of establishing Animal Guardians in Taiwan is to set an example to be followed by other Asian countries.” The operations team, NOE, of Animal Guardians has participated in assisting regional animal departments on multiple investigations of slaughtering dogs and cats.

Congressman Chen Xue Sheng exclaims in his speech, “A huge thanks to World Dog Alliance for supporting local organizations on promoting legislation in Taiwan.”

NOE’s operation director Li Rong Feng stated that their members will receive reports and assistance from the public to assist animal departments. As of now, we are lacking operation fees, our members not only donate money, but also put themselves in danger while investigating. Now that we have received the funding from World Dog Alliance, the first thing is improving our equipment, buying hidden cameras and protective clothing, it is going to bring massive help in future research missions.

Animal Guardians is certainly a unique specialized team, it seems to have shown the ambition to the international media. Li says, “We have 30 members in operation, our mobility is as good as the police force. In order to monitor the results better, we will follow the police force and set up an operations flow, so the procedures will be more complicated, we hope the public can understand and cooperate.”

Other than receive reports from the public passively, Animal Guardians will also take the initiative to investigate and assist the government and related government departments. Li indicated legislation banning dog and cat meat is a milestone for Taiwan to become more civilized, hopefully the related departments will have the determination to implement the law, the days that civilian organizations will not have to stand alone anymore.

Please see the link to the video of our press release: