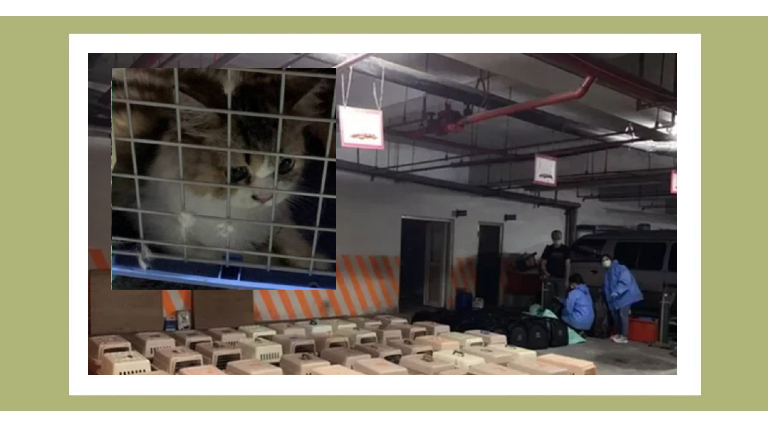 The International Homeless Animals Day falls on every third Saturday in August, which is 21 August this year. Ironically, it is the darkest day for animal protection in Taiwan. The Taiwan Government euthanized 154 smuggled cats seized by the Coast Guard Administration, in the name of epidemic prevention. The euthanasia was conducted only 8 hours after the cats were seized, leaving no time for any rescue work. The short-noticed culling by the government has caused a public outcry.

On 21 August, media reported in the morning that the Coast Guard Administration stopped a smuggling ship in Tainan and found 154 cats, including Russian Blue Cats, Maine Coons and Ragdolls. Cat lovers and animal protection groups then organised petitions to the government and legislature, urging to spare the cats. While they were preparing the petitions, they were told at 4 pm that all the cats had been euthanized. The public was outraged by the government’s decision.

Tsai Ing-wen responded on Facebook in the evening. She claimed that she shared the public feeling, but the government had to protect domestic animals from diseases caused by smuggled animals. The euthanasia was carried out on legal grounds. Minister of Council of Agriculture Chen Chi-chung explained that it was a very difficult decision to euthanize the 154 cats. He understood public outrage and discontent, and was willing to bear all responsibilities. However, he stressed that cats have high risks of spreading rabies, which is fatal to humans. Animals with unknown origins could disrupt the local ecosystem, bringing harmful effects to humans, pets, wildlife and economic animals. The government ought to take the highest level of precaution when it comes to smuggled animals.

Animal welfare groups disagree with the Government’s views. The World Dog Alliance (WDA) and 9 other animal welfare groups issued a joint statement. After reviewing relevant laws and regulations, none of them required the government to slaughter or euthanize animals immediately. It is necessary for the government to review and amend current legislation, so that the implementation could get in line with humane spirits and protect innocent animals without ruining quarantine precautions.

The animal welfare groups also urge the government to publish all records on euthanized smuggled animals. The groups aimed to review if the procedures are in line with animal welfare and humane spirits. All information should be transparent for public supervision.

Only the captain and crew members were arrested or under investigation in this case. It was a shame that the police failed to dig into the black crime chain behind. Animal groups now call for a full investigation.

The 154 cats can no longer be saved, but we shall not let them die for nothing. Animal groups will continue to follow up this case!