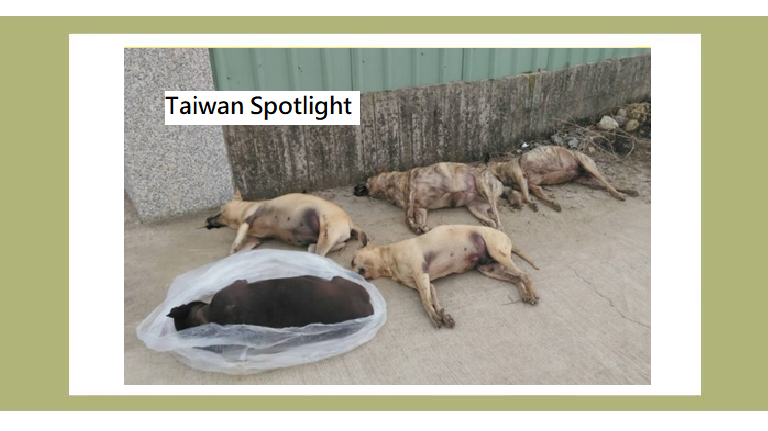 On November 25, 2020, in a farmfield in Dashu District, Kaohsiung City, 6 stray dogs were fed with poisoned meat buns, and died with noses and mouths bleeding. This case was just the tip of the iceberg.

The penalties for poisoning and killing animals are so severe. Logically speaking, it should be able to effectively reduce animal abuse cases, but there are still endless poisoning and killing incidents throughout Taiwan. What are the reasons? On December 9, 2020, 10 animal protection groups, mainly rescue teams, petitioned the legislator Su Zhifen, hoping that she could help solve the case of poisoning animals, which is difficult to report to the police, and the people in Taiwan do not know that poisoning of animals is a criminal case. Situations involving serious crimes.

Lawyer Yan Hongyi, chairman of the “Taiwan Animal Protection Legal Research Association,” said that the biggest victims of poisoning cases are stray dogs. Often a single poisoning can kill multiple dogs. For example, 6 dogs and 5 cats were poisoned at the same time in Hsinchu in mid-October. In the tragedy of death, another 6 stray dogs in Kaohsiung ate poisoned buns in late November, which made the caremother who took care of them very sad.

Taiwan legislator Su Zhifen (the person facing the camera) met with representatives of animal protection groups petitioning the animal poisoning case at the Congress Office. Zheng Zhujing, Chief of the Animal Protection Section of the Council of Agriculture (left 2) also attended the meeting to answer related queries. You Jieping/Photo

Xu Chunshui, the person in charge of “Tainan Xu Chunshui Animal Home”, said that according to the data of the Council of Agriculture, after the implementation of “zero culling” in Taiwan, as of the end of 2018, there were more than 140,000 stray dogs and 33 public shelters in Taiwan. The maximum collection capacity is only more than 7000. It can be known that most dogs can only live outside in their lifetime, but there are caring people who feed, and there will be people who hate the group of dogs, and there will be “human-dog conflicts.” “. Therefore, neutering stray dogs, clean feeding, and removal of problem dogs are all tasks that the competent authority must implement.

Yan Hongyi pointed out that the people who throw poisonous bait are often the elderly. They don’t know that poisoning animals is a criminal case of felony. Coupled with the negative attitude of the police when facing the report, these people may easily commit crimes. Once a poisoning case occurs, even if the report is successfully reported and the police officers are actively investigating, there are still great variables in the judicial system. Yan Hongyi used an actual case as evidence, “The police solved the case and the perpetrator admitted to the poisonous killing. However, the prosecutor gave a sanction of non-prosecution on the grounds of “not raising minor crimes.”

Shao Baihu, chairman of the “TNVR Hsinchu Taiwan”, proposed the importance of establishing a standard procedure for handling SOPs. He said that not only did my parents and mothers face the poisoned stray cats and dogs, they were helpless, even the supervisors would only take pictures when they arrived at the scene, and sometimes they even wanted to throw the cats and dogs’ bodies into the trash without knowing it. Evidence must be preserved to facilitate subsequent investigations. How can we talk about the case and solve the case?

（1）    The Council of Agriculture, the competent authority for animal protection, should strengthen the promotion of the legal reality that poisoning and killing animals is a felony, and deter those who neglect animal life.

（2）    The Council of Agriculture, the Police Department, and the Ministry of Law should jointly discuss and formulate standard procedures for handling animal protection criminal cases based on the information provided by the first-line animal protection personnel.

（3）    Strengthen the awareness of animal protection of police and judicial personnel and their understanding of the “Animal Protection Law.”

Commissioner Su Zhifen promised to hold an optional press conference to let the public understand the cases of poisoning and killing animals, as well as the criminal responsibility committed. More importantly, representatives from the Police Department and the Ministry of Justice will be invited to the scene to discuss their demands on animal protection groups. Make a specific response.

* Although Taiwan has introduced the “Lobbying Law” bill, it has not been enacted, because it is not difficult to see legislators, and the parliamentary offices of the members have become a convenient place for people to petition.

＊According to the information of the Council of Agriculture, there were 146,773 stray dogs in Taiwan as of 2018, and 33 public shelters