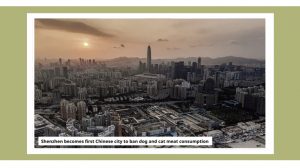 As of 1st May this year, the city of Shenzhen will be the first city in China to permanently outlaw the consumption and sale of dog and cat meat.

The ordinance — which was drafted by Shenzhen’s municipal government in February this year — was prompted by the Chinese Central Government’s nationwide crackdown on its wildlife trade.

The rapid-fire spread of the COVID-19 virus catalysed the move by the 13th National People’s Congress, as scientists have traced the source of the outbreak to wildlife wet markets in Wuhan.

Trafficked pangolins in particular have been found to be the source of the pathogen, which has taken the globe by storm.

The ‘Shenzhen Special Economic Region Regulation on a Comprehensive Ban on the Consumption of Wild Animals’ will specifically ban the sale and consumption of animals that are protected species are not classed as domesticated, as well as companion animals.

As such, animals not included in the ban are pigs, cows, sheep, chickens, ducks, geese, pigeons, and quail.

“Humans have a long history of domesticating dogs and cats as pets. Compared to other animal species, pets are much closer to us. Banning the consumption of pet meat is a manifestation of a civil society.

“Therefore, it should be illegal to eat pets”, said in an address regarding the passing of the ban.

Since it was founded in 2014, the World Dog Alliance (WDA) has been promoting legislation to ban dog and cat meat in across the globe, but mainly in nations such as China and South Korea where the consumption of dog and cat meat is most prevalent.

The WDA has sent multiple letters to the Chinese government, and it has hosted a number of seminars and conferences alongside prominent ministers, legal experts, and lobbyists who are in favour of a nationwide ban.

The “White Paper to Increase the Punishment on Dog Theft” was drafted by the WDA and submitted to the National People’s Congress to prompt the drafting and amending of the required legislation.

National opinion in China also reflects a strong desire to institute a country-wide ban on dog and cat meat consumption.

In an online survey conducted with Shanghai University, it was found that 88% of participants supported a ban on dog and cat meat in China.

Although figures vary between animal advocacy groups, it is estimated that around 30 million dogs are slaughtered annually for sale and consumption.