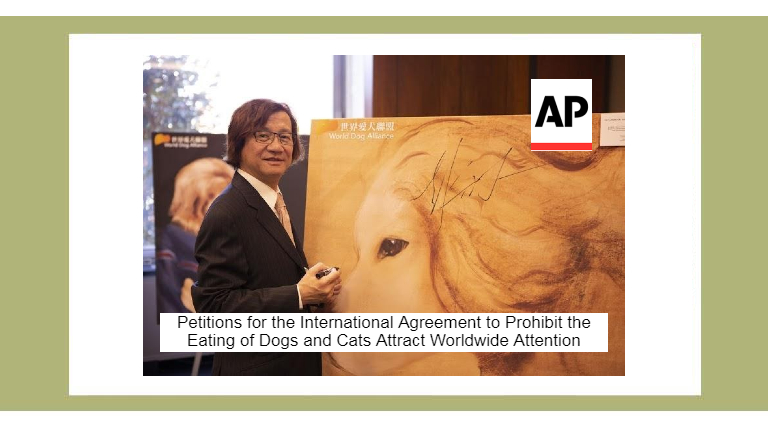 In 1973, the Convention on International Trade in Endangered Species of Wild Fauna and Flora (CITES) was established in Washington D.C., the United States. With 178 member states, it is one of the most powerful international agreement in the world. Presently, another international agreement calling for the protection of companion animals has been initiated by the World Dog Alliance (WDA), turning a new page in the history of humanity.

The WDA launched an online petition on Care2, the largest online petition platform in the world, calling for the United States to spearhead the International Agreement; till today the petition has received 260,000 signatures. Some signatories left comments to express their views, “Dogs are a member of the family. They love and trust us. Would you eat or abandon your children?”, “Dogs and cats feel pain, just like us. Fear, just like us. Love, just like us. Don’t eat us”. Their words serve as a clear reflection of the international community’s love and care for companion animals, as well as the urgent hope for an international framework to protect them.

Compared to grassroots petitions, a congressional petition letter can more often make its way to the top administrations. In February 2020, U.S. Representatives Alcee Hastings (D) and Rodney Davis (R) united 28 other lawmakers to sign on a letter to President Donald Trump, urging him to lead the International Agreement to Prohibit the Eating of Dogs and Cats. The congressional letter was responded positively by Sonny Perdue, the United States Secretary of Agriculture.

To fight climate change, United States President-elect Joe Biden has pledged to re-join the Paris Agreement. The WDA believes animal protection is no less important than environment protection; thus it maps out plans to launch another online petition on the White House website in 2021 with the target of 100,000 signatures, and to lobby the U.S. Congress for a bipartisan congressional letter to Joe Biden calling for the International Agreement, aiming to set off the much needed trend of animal protection in the United States.