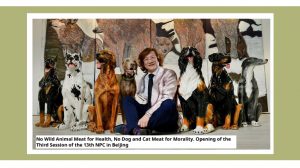 No Wild Animal Meat for Health, No Dog and Cat Meat for Morality. Opening of the Third Session of the 13th NPC in Beijing

No Wild Animal Meat for Health No Dog and Cat Meat for Morality Opening of the Third Session of the 13th NPC in Beijing.

From World Hall of Fame Network Photos by WDA

President Xi recently further proposed a new idea of “uniting and cooperating to overcome the epidemic and jointly building a human health and health community”. This guiding ideology truly embodies the wisdom of the Chinese nation and represents the voices of 1.4 billion Chinese and 60 million overseas Chinese. To achieve “No Wild Animal Meat for Health, No Dog and Cat Meat for Morality.” in China, six years ago-December 12, 2014, a non-profit organization in Hong Kong was born “World Dog Alliance” (English: World Dog Alliance, abbreviation: WDA), and proposed the above purpose for the first time globally. In order to promote the global “clear legislation, fasting dog meat” goal. Through various channels, including music, art, speech, film, awards, etc., the institution has civilly promoted, inspired and educated people to legislate around the world, calling on people to treat animals well, not to kill, trade and eat dog and cat At the same time, it has virtually established a positive image of young people in Hong Kong who love Hong Kong, China and the world. Genlin (Hiroshi Horiike) was born in Shanghai, and lives in Hong Kong. He founded World Dog Alliance and other charities such as Genlin Foundation. He is currently the Honourable Board Member and Outstanding Alumnus of Shanghai University. Twenty years ago, Genlin started to devote himself into charity programmes such as donations to build schools, libraries, gymnasiums, and setting up scholarships. He promoted to the public that 90% of his wealth would be allocated to charity, whilst he would retain 10% to his family. Genlin has a great dream to build a society with wisdom, fairness, freedom and care. WDA aims to protect animals and love dogs, which has been his ultimate life mission. Genlin in his art studio