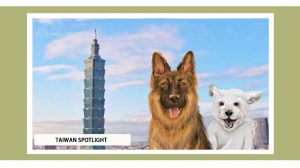 The COVID-19 pandemic continues to rage across the globe. Death toll has reached over a million. Reports of dogs, cats, lions and minks tested positive are widely spread. Despite Taiwan’s success in containing the virus, people were worried about an outbreak among dogs and cats. Fortunately, Taiwan authorities reassured the public with strict diagnostic criteria for animals and continuous clarification on rumors.

28th February 2020 – Taiwan Council of Agriculture Executive Yuan (COA) publicly disagreed with  Hong Kong Agriculture, Fisheries and Conservation Department’s (AFCD) claim that a dog was allegedly tested positive for COVID-19. According to AFCD’s press release, the saliva and nasal swab extracted from a virus carrier’s dog were tested “mild positive”, fueling fear in mainland China, Hong Kong and Taiwan. COA vice chairman Huang Jin-cheng suggested that because pets are close family members to humans, a dog’s mouth or nose might get contaminated by the owner’s cough or sneeze, but the virus would not infect the animal.

Xu Rongbin, deputy director of Bureau of Animal and Plant Health Inspection and Quarantine, explicitly stated that a confirmed infection would not be tested “mild positive”, and AFCD should have verified the result before publishing any ambiguous information that causes public confusion.

23rd March 2020 – Taiwan Veterinary Medical Association and member of Legislative Yuan Wang Dingyu held a press conference to refute the announcement made by AFCD on March 19 that a German Shepard was infected with COVID-19. Liu Zhenxuan, a professor at the National Taiwan University School of Veterinary Medicine, said that blood testing is the only reliable way to confirm a COVID-19 infection, and Hong Kong is the only place in the world that solely relies on saliva and nasal swab testing for dogs. Veterinarians at the meeting jointly stated that the AFCD’s announcement lacked scientific evidence and called for the media to refrain from further reports, they also urged pet owners in Taiwan not to believe the false claims.

25th April 2020 – The Hong Kong government announced there is no evidence suggesting that pets could transmit COVID-19 to humans or other animals; Taiwanese veterinarians’ opinion was proved to be right. The AFCD’s director Leung Siufai pointed out that the test was conducted in collaboration with Hong Kong University. He believed the pet was infected by its owner, and reminded even though it was an isolated case, pet owners should maintain good hygiene.

The pandemic-delayed digitalisation of animal protection teaching materials will be published online in November 2020. Professor Peng Yaling of Taichung University of Education will be responsible for compiling the teaching materials and is currently preparing the sequels “Economic Animals” and “Wild Animals”.

The documentary “Twelve Nights” premiered in 2013 sparked public concern about public shelters and stray dogs adoption. Director Raye launched the sequel “Twelve Nights 2: Back to Day Zero” in 2020, which is scheduled for November 27.  In order to promote animal protection education, a fund-raising plan and a sponsorship program were launched. Taiwanese students in more than 1,000 middle schools, high schools and universities will be able to watch this documentary on campus.