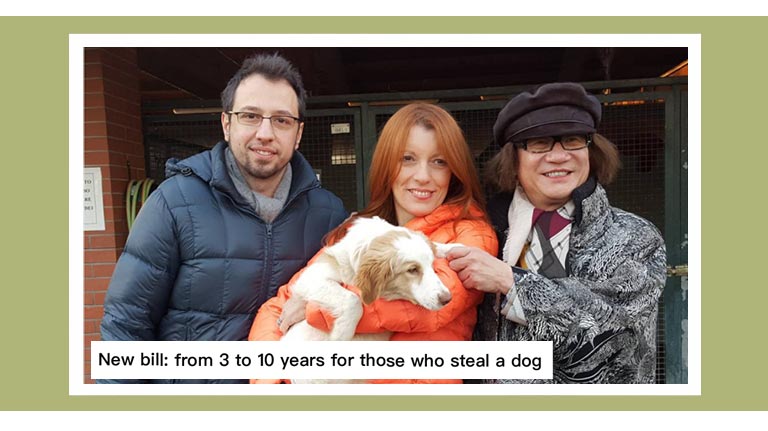 New bill: from 3 to 10 years for those who steal a dog

Presented by Michela Vittoria Brambilla, President of the Italian League for the Defense of Animals and the Environment and presented today before the Chinese director Genlin president of the World Dog Alliance against the trafficking of pet meat in China.

Rome, November 28, 2015 – A minimum of three to a maximum of ten years. And ‘what would risk who entered the house or in the courtyard of relevance to steal a pet, if it were approved, the bill of

Michela Vittoria Brambilla, President of the Italian League for the Defense of animals and the Environment and MP for FI, which adds the theft of animals from disease to the list of aggravating circumstances of the crime of theft. The proposal was shown in Milan during the event “The Magic of Hope”, organized by the ‘ Association “SOS Greyhounds” , dedicated to the theme of the exploitation of dogs in Europe and Asia, with the participation of Chinese director Genlin, president ofWorld Dog Alliance fighting the trafficking of dog meat in Asia , of which Brambilla is the spokesperson for Italy.

“On Facebook and other social – said the former minister – multiply the pages that mention” disappearances “of four-legged friends can not be explained as mere expulsions and ask for help.Unfortunately, the theft of animals – I prefer to speak of “kidnapping”, being still of sentient beings – not one of the surveyed crimes from the databases of law enforcement, which usually do not have microchip readers. It is necessary to review the paper reports to get an idea of the true extent of the phenomenon, which seems to affect the entire national territory, from north to south, and animals of every race and kind. ” “Since we live – says Brambilla – in a country with overcrowded shelters, in general it is unthinkable that dogs or cats are stolen by someone who wants to keep them for himself. Even redemption requests are rare, and it often happens that to nothing worth offering very generous rewards. They can not therefore be excluded most disturbing hypothesis: animals could be destined for the black market, begging or illegal fighting or even worse, the illegal trade in skins or meat or unauthorized experimentation. ”

Hence the idea of introducing a new aggravating circumstance of the crime of theft. “Already under current legislation – said the former minister – the addition of this simple regulation lead to a significant tightening of punishment, provided that the pet animal’s abduction often occurs in the home or in its appurtenances, more severe assumptions of simple theft, in which case the offender would risk not more a year, but from a minimum of three to a maximum of ten years. The “kidnapper” potential will have one more reason to reflect, before the age of this heinous crime. The dell’aggravante introduction also could facilitate the census of animals to theft complaints , collection and dissemination of accurate statistics.But my bill should not be considered only for its deterrence, but also, even as part of a system that continues to regard the animals as mere “things”, for its aim to emphasize the special significance of the emotional relationship between man and animal. deserves attention and respect the pain of those who lose “a friend is not human” and exposed to peggioredestino can imagine. “He concludes Michela Vittoria Brambilla.

” I never thought that man could be so cruel to animals and especially dogs, our best friends – said Genlin commenting on the film-truth Eating Happiness he made ​​denouncing the trafficking of dog meat in countries Asian and in its China – Italy is a country that already recognizes many of the rights of animals and now will go further to improve its level of protection. in contrast, in Asia the situation is very different. Stop forever the meat traffic dog is my mission in life. ” During the event, the farmhouse “La Calcaterra” of Ozzero (Milan), “SOS Greyhounds” delivered to the Italian adoptive families tens of
rescued dogs by Irish cinodroms, just arrived in our country to begin a new life.
For contacts with our editorial staff: animali@quotidiano.net