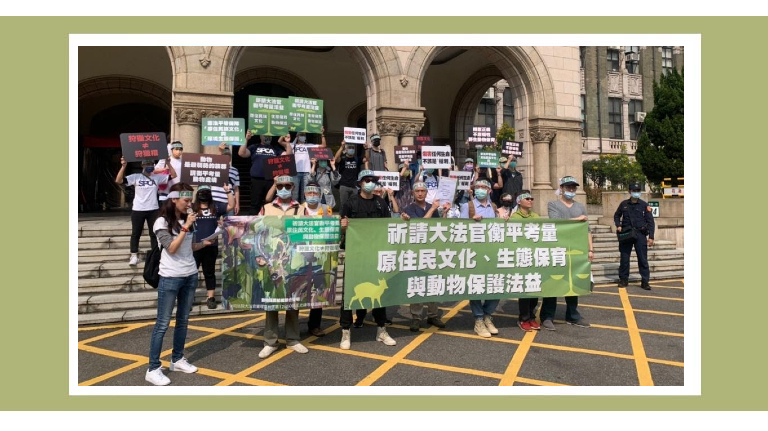 On March 19, 2021, a special petition team appeared in front of the Taiwan Judicial Yuan. They are composed of nearly 60 animal protection and animal care organizations. The petitioners are the justices who hold the right to interpret the constitution. , And the goal of Chen Qing’s action is to fight for wild animals’ right to survive, especially conservation of wild animals. Because the content of the petition involves indigenous peoples and the preparation time is only 3 days, the participating groups believe that regardless of whether the petition can be accepted by the justices, this action is enough to be marked on Taiwan’s animal protection history page!

The incident originated from the “Bunun hunter Wang Guanglu case.” Wang Guanglu hunted protected species, Taiwan serows, and reeves’ muntjacs with a shotgun in 2013. He violated the “Firearms, Ammunition, Knives and Weapons Regulations” and the “Wildlife Conservation Law”. In 2015, he was sentenced to 3 years and 6 months in prison by the court, which triggered dissatisfaction from the indigenous peoples and they applied for a constitutional interpretation because the sentence violated the constitution. The result of constitutional interpretation is expected to be announced on April 9, 2021.

Many animal protection groups are worried. Once the constitutional interpretation concludes that the indigenous peoples have hunting rights that are not subject to legal restrictions, Taiwan’s wildlife conservation norms will collapse. Therefore, they decided to take to the streets to speak out for the most vulnerable wildlife and take into account the harmony of the ethnic group. It is well known to the public that when writing the joint statement, it is worthy of careful consideration. The following is the full text of the joint statement of the animal protection group:

I pray that the justices will consider the legal interests of indigenous culture, ecological conservation and, animal protection in an equal manner

Regarding the constitutional interpretation petition concerning the judicial decision on the hunting, slaughtering and utilization of wild animals by the aboriginal people, the Justice of the Judicial Yuan will be able to make an explanation in April, and the hammer will become a historic judgment. The animal protection group united to voice the most vulnerable animal in this case, appealing to the justices and society: hunting should not be the “right” of any particular ethnic group or individual. The constitution equally protects the culture of all ethnic groups and the ecological environment of Taiwan. It is hoped that the justices will consider the indigenous culture and the legal benefits of environmental protection in a balanced manner to maintain ethnic harmony and environmental ecology.

1. “Indigenous languages ​​and culture” and “environmental and ecological protection” are both legal benefits protected by the basic national policy of Article 10 of the Constitution. “Hunting culture” is by no means equal to “hunting rights.” Different ethnic groups have their hunting, fishing, and hunting methods. Therefore, the state and even the regional organizations that unite between states jointly develop appropriate regulations to manage any ethnic and inter-state relations. Hunting, fishing, and hunting are necessary!

2. “Culture” is the way of life that human society has reconciled and displayed in response to changes in the surrounding life. Therefore, “culture” is a process of constant flow and change. The cultures of all ethnic groups in the world evolve and flow with environmental changes and social development, and the ecological environment is for the whole people. To live together, the rules and regulations of hunting, fishing, and hunting need to be cautious; including hunter qualifications, hunting methods, number of animals to be hunted, hunting period, hunting area, return system, etc., all need to respond to wildlife conservation Current situation and concept adjustment management system.

4. Based on transitional justice, the justices should review whether the Constitution still receives unequal treatment of indigenous peoples’ status, political participation, and social and economic rights, but should not allow transitional justice to be based on irreversible wildlife conservation and the ecological environment. And the harm that does not conform to the principle of proportionality.

5. The state’s respect for and protection of indigenous cultures does not guarantee anyone’s “right” to hunt but echoes the Constitution’s affirmation of multiculturalism. It should not be anyone’s “right” to harm any life. Even if the law allows the slaughter and utilization of economic animals, it must also take into account the maintenance of animal welfare and implement the slaughter operation regulations. The supervisory mechanism for the use of animal experiments by scientists is also the same, so hunting, fishing, and hunting The relevant regulatory standards should be the same.

The disadvantage of animal groups is no less than that of any group. I urge the judges to consider the indigenous culture, ecological environment protection, and animal protection law balance to maintain the harmony of the ethnic group and the environment.