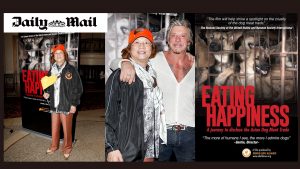 ‘I picked up a gun’: Mickey Rourke reveals he came close to suicide during dark period… and only his concerns for pet dog stopped him pulling the trigger”.

Mickey Rourke has revealed how his dog stopped him from committing suicide when he was going through a dark time.

The 63-year-old made the revelation at the screening of the documentary, Eating Happiness, in Los Angeles on Sunday, according to Page Six.

He said: ‘I was going through a really rough time. I was hurting myself and I was sitting in the closet one day.’

The actor, who has six dogs, continued: ‘I couldn’t take it anymore and picked up a gun.’

The Sin City star explained: ‘I was deciding what part of my head to put it on and my dog, Beau Jack, he [cried] and I looked over and he looked up at me like this and…he said [with this eyes], who’s going to look after me?’

According to The New York Times, Beau Jack, who was named after a prizefighter, died in 2002 after suffering a heart attack.

He was last pictured with his pet back in 2002 by www.mikeruiz.com.

Mickey attempted mouth-to-mouth resuscitation after he collapsed, but it proved futile.

He even took the body of his beloved dog to a church to be blessed.

When the actor won a Golden Globe for Best Actor for his role in The Wrestler, he thanked his dogs in his acceptance speech.

The star said: ‘Sometimes when a man’s alone, that’s all you got is your dog. And they’ve meant the world to me,’ he said during the 2009 awards show.

The day after the awards show, the Immortals actor referenced the same incident during a Barbara Walters Oscar special on ABC, but at that time, said he did not want to commit suicide.

Mickey told her: ‘I sort of self-destructed and everything came out about 14 years ago or so…the wife had left, the career was over, the money was not an ounce. The dogs were there when no one else was there.’

‘I was in a bad place and I just remember thinking, ‘oh man, if I do this,’ [and] then I looked at my dog, Beau Jack, and he made a sound, like a little almost human sound.’

He continued, saying: ‘I don’t have kids, the dogs became everything to me. The dog was looking at me going, ‘who’s going to take care of me?’

His film career declined after he decided to pursue a boxing career, which left him with a broken nose and toe, compressed cheeks and a split tongue.

He mistakenly went to the wrong plastic surgeon, who botched his face.

The Man On Fire star also declined a possible career reviving role in the now classic Pulp Fiction, which ended up going to Bruce Willis.

His personal life was in the news as well, after he was arrested in 1994 for spousal abuse, which was later dropped.  In 2007, the star was arrested for DUI charges while in Miami Beach, Florida.

He was married to Debra Feuer from 1981 to 1989.  His second marriage to Carre Otis lasted only six years, from 1992 to 1998. The model co-wrote an autobiographical book, called Beauty Disrupted, about their marriage, claiming that he was abusive to her.

Dedication: Eating Happiness is about the brutal human dog meat consumption through the eyes of animal rights activist Genlin; dog lover Mickey at the 2009 Golden Globes, who mentioned his dogs in his speech

Mickey’s love for dogs is well known, so it’s no surprise the star went to the call-to-action documentary.

Eating Happiness is about the brutal human dog meat consumption, through the eyes of animal rights activist Genlin.

The former professional boxer recently wrapped the action film, Weaponized, which is set to be released in 2016.