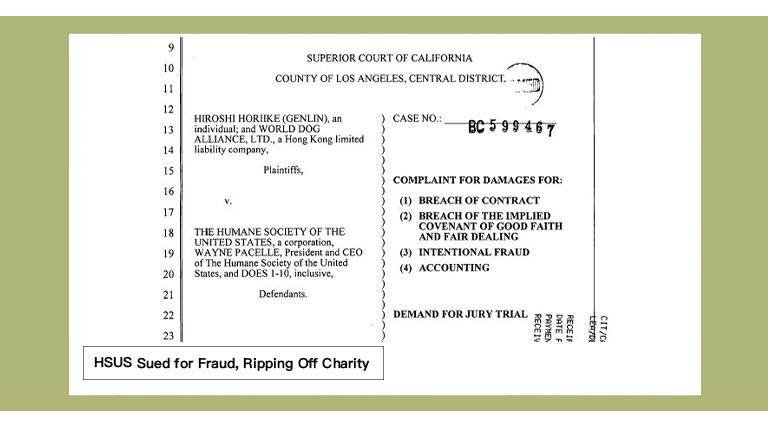 The World Dog Alliance, a Hong Kong-based charity, had alleged that HSUS took a $500,000 grant from the organization to do PR and lobbying work and didn’t hold up its end of the deal. The Alliance was looking for an American animal charity to help promote a documentary it produced on the cruelty of the dog-meat trade in Asia. The Alliance alleges HSUS promised to do this work in return for $1 million over two years,

The Alliance and the film’s director filed suit yesterday against HSUS and its CEO, Wayne Pacelle, in Los Angeles court. The complaint lays out more detailed allegations regarding HSUS taking money and not fulfilling its promises:

As the multitude of WDA’s unanswered emails began piling up, HSUS personnel began claiming that HSUS had no experience promoting films such as the Documentary Film, and that the subject matter and nature of the film made it more difficult to promote. Of course, none of this had been mentioned by HSUS and its representatives prior to obtaining funding from WDA.

Since we published our first post, HSUS has responded publicly to the allegations by claiming “planned screenings were canceled at the last minute by the producers for unexplained reasons.” Perhaps the producers canceled them because they figured no one was going to show up due to HSUS not doing what it had promised to do.

It’s hard to say whether HSUS purposely duped this donor or is just grossly incompetent when it comes to getting things done. Regardless, this is yet another case of this wealthy charity raising money from dog lovers, only to leave the dogs (and their donors) in the lurch.