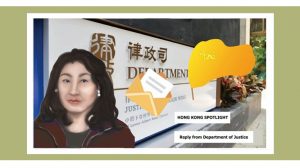 [Hong Kong Spotlight] Reply from the Department of Justice

The main points are as follows.

5.4 There must be legally sufficient evidence to support a prosecution; that is, evidence that is admissible and reliable and, together with any reasonable inferences able to be drawn from it, likely to prove the offence.

5.5 The test is whether the evidence demonstrates a reasonable prospect of conviction. To satisfy that test, a prosecutor must make prospective judgements about matters such as:

5.6 A prosecutor will need to consider in relation to witnesses: the reliability of memory; any suggestion of exaggeration; any association with the accused (favourable or unfavourable); any motive not to tell the whole truth; availability; psychological or other personal characteristics (including in the case of a child or incapacitated witness); vulnerability to attack by the defence.

5.7 The public interest is not served by proceeding with cases that do not satisfy this test. The resources required to prosecute must be responsibly applied only to proceedings that will be fair and that are likely to be effective.

Last week, three cases of animal cruelty were reported in three days. On 14th October, an old man was arrested in Yuen Long for ripping out organs from a dog carcass for consumption. On 16th October, a puppy was abandoned in a rubbish bin with signs of abuse. Meanwhile, a pigeon was tortured in Tsing Yi. The police received 150 reports of animal abuse in the first half of this year, of which DoJ only made prosecutions on 5 cases. Hong Kong is a metropolitan city, but its animal welfare standard is as underdeveloped as a third-world country.

WDA is disappointed with DoJ’s response. Given the solid evidence, it is difficult to understand DoJ’s claim that ‘all evidence failed to support a reasonable prospect of conviction’. WDA firmly believes that it is time to amend the current regulations and set up an all-rounded animal protection law, so as to prevent such tragedies from happening again.