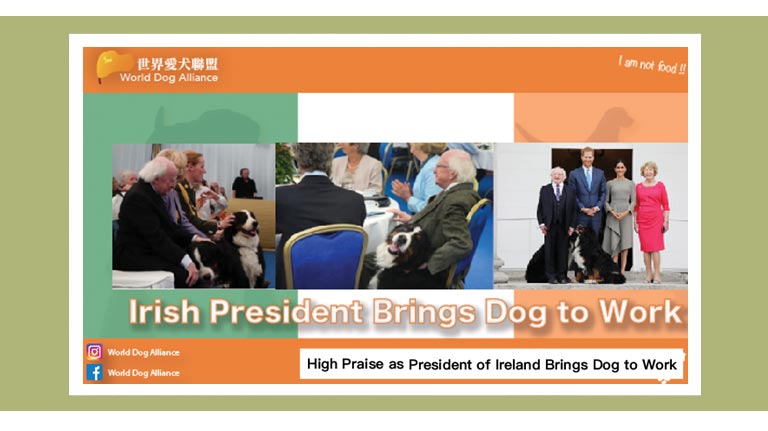 High Praise as President of Ireland Brings Dog to Work

High Praise as President of Ireland Brings Dog to Work

One of the best employee benefits in Google is dogs are allowed in the office. According to a research conducted in the U.S., about 40% of U.S. employees would exchange pay raise and vacations for the right to bring their dogs to work. President Michael D Higgins has a high paying job that lets his dog stick with him all time, a job every dog lover would dream of. 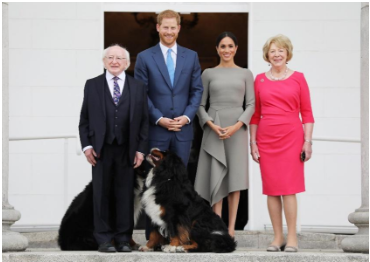 Photo of Irish President and his wife with Prince Harry and Meghan Markle. The two “First Dogs” joined the shot, but both resisted to move their sights away from the presidents.

The 77-year-old Michael D Higgins has been titled both a poet and a politician. Not long after he was elected as the president of Ireland in October 2011, he adopted Shadow, a Bernese Mountain dog of great size and long hair, in March 2012. Shadow’s ex-owner had to abandon it before immigration. Fortunately, the president immediately volunteered to take care of Shadow. It was at that moment, the people of Ireland knew the new president is a dog lover who had had 19 years of experience in bonding with dogs.

The Bernese Mountain dog who makes itself at home in the presidential palace. It makes people wonder if it would be awkward when guests allergic to dog fur visit the president.

Soon, the president adopted another dog namely Bród probably to befriend Shadow. Photos of both dogs have been frequently reported by media. The one taken in 2016 earned it place in the front cover. It was taken over the palace walls on a Sunday morning by Danny Callaghan, a Berlin barber. The president walking his dogs entered the lens that produced the extraordinary photo. 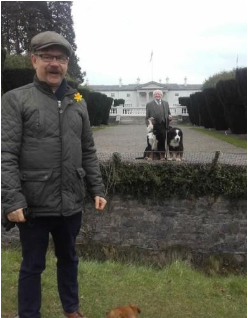 The Berlin barber unexpectedly captured the image of the president walking his dogs. It was posted in the front cover.

President Higgins enjoys sharing about his life with his dogs on Twitter with the nationals. Be it a state banquet, a guest visit or a public speech, his two dogs are always following him like shadows. It is “normal” considering 49% of Irish people own dogs. Every new photograph would trigger a new wave of discussion.

The public opinion has interesting comments, “They are adorable. The best thing about them is they always have their eyes on their masters and butts facing the camera.” “It must be cumbersome cleaning up the dog dur stuck on the carpets.” “My relationship goal is to find someone who would revel staying with me like Bród and Higgins.” 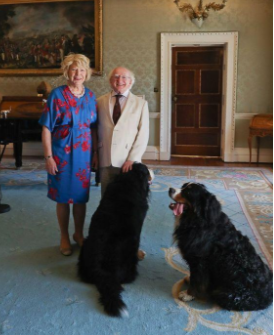 Two Bernese Mountain dogs wanders through the presidential palace. It makes people wonder what happens to the dog fur stuck in the carpets. 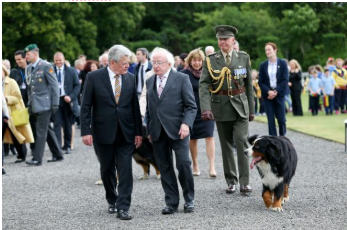 The Irish president has two big dogs as guards. He seems to be enjoying their company..