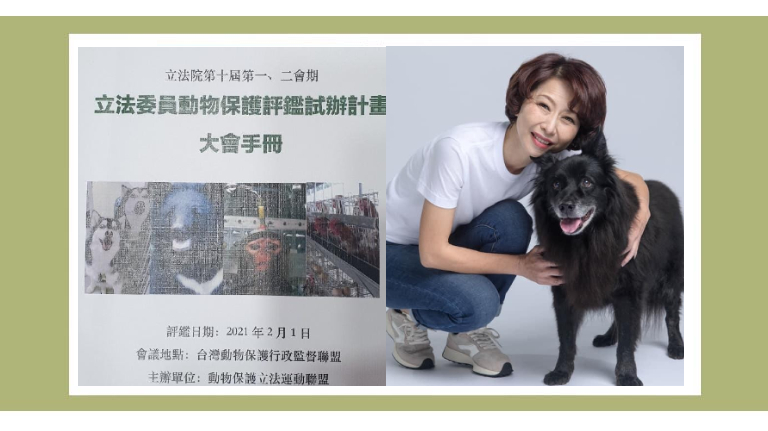 The  “Animal Protection Review on Legislators” has been released for the first time, and five outstanding legislators will receive awards and commendations on March 16, 2021. The picture on the right shows the award-winning legislator Luo Zhizheng.

Taiwan’s animal protection organizations held two “Legislative Animal Protection Contribution Award” in 2015 and 2019 respectively. The winning legislators were awarded the title of “Animal Protection Legislators”. In order for this award to improve animal welfare and protect animals Legal interests and other levels have a more far-reaching influence. The organizer has decided to change the evaluation method and expand the scale in 2021. After rigorous operation procedures and heated discussions by representatives of 7 animal protection groups, 5 outstanding legislators have been selected and  will be awarded on March 16, 2021.

Because this evaluation is a new method, it is positioned as a pilot project to facilitate subsequent amendments and make the system more perfect. The organizers including the World Dog Alliance (WDA), the Life Caring Association (LCA), the Animal Protection Association (APA), the Environment and Animal Society of Taiwan (EAST), the Taiwan Animal Protection Monitor Network (TAPMN), and the Taiwan Society for the Prevention of Cruelty to Animals (TSPCA) and Citizen Congress Watch. The review this time will cover the proposals on animal welfare in the first and second sessions in 10th Legislative Yuan.

During the process, the representatives of the eight groups were given points according to the importance of the laws and provisions. The bills “unfavorable to animal protection, animal welfare, and universal values” were not included in the scoring. Committee member Kong Wenji’s bill  “Relaxing Restrictions on Hunting for Indigenous People” falls into this category. The bills benefiting animals by influencing the Constitution is given the highest level of score.

The selected five legislators for the awards are: Zheng Liwen, Chen Tingfei, Luo Zhizheng, Lin Shufen, and Cai Biru. Although Cai Biru had only one proposal, because it was a constitutional amendment for animal protection, it was “significant and far-reaching”, so he was selected over Lin Yihua with 2 cases.

The organizer also specially arranged for 5 legislators to enter the shed to take photos together with the animals. Although in the end only Chen Tingfei, Cai Biru and Luo Zhizheng took the time to participate, they all talked about their friendship with animals while facing the camera. For example, Chen Tingfei was accompanied by a poodle in high school. After the death of her pet, she stopped raising a dog due to the hardship of life and death. Luo Zhizheng grew up in a dog-loving family and had a maximum of 9 dogs in his family.

Cai Biru, who was born in a peasant family, has a deep memory of his father’s first life relationship with the old cow in his family. After the old cow stopped plowing the fields, his father stipulated that his children should take the old cow out for a walk after school, and the old cow was finally sent to the Old Cow School by his father.  Cai Biru, who is a rabbit in the Chinese zodiac, was arranged to take a photo with the rabbit  “Captain Marvel” of the “Love Rabbit Association”. When she heard that rabbits were often abandoned, she immediately said that she would be more concerned about related issues in the future. She was also very impressed by the easiness of Captain Marvel.

The “Animal Protection Review on Legislators”  will conduct the selection of outstanding legislators in each session of the Legislative Yuan. In the 8th session, the committee will summarize the results of proposals and present the current “Legislative Animal Protection Contribution Award”.