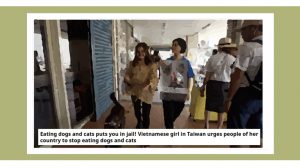 On 11st April 2017, World Dog Alliance (WDA) successfully enacted the law to ban dog and cat meat consumption in Taiwan. Offenders could be fined for NT$2,500,000. The new law changed the eating habit of Vietnamese workers in Taiwan, making it a legal fact that dogs and cats are our companion, but not food. Now there is even a Vietnamese girl dedicated to promoting the new law for other Vietnamese people in Taiwan.

Qingyuan Ruan finds her root in Hanoi, Vietnam. She began to step into the world of animals when she raised a kitty. She first got in touch with Taiwan Animal Equality Association during college, and started her “career” of promoting “dog and cat meat ban”, hoping to remind all Vietnamese people in Taiwan that eating dogs and cats is illegal.

Qingyuan’s mission is supported by the Taiwan Animal Equality Association, which has set up a page explaining the ban accompanied with pictures showing the gravity of eating dogs and cats.

Any person must not harass, abuse, harm animals or slaughter dogs and cats arbitrarily. The maximum penalty is a term of imprisonment or detention of less than 2 years and a fine of NT $ 200,000 to NT $ 2 million.

Any person who sells, purchases, eats or holds the carcasses of dogs and cats, internal organs, or foods containing their ingredients will be fined NT $ 50,000 to NT $ 250,000.
(Source: Taiwan Animal Equality Association)

Convicted by the prosecutor or found guilty in the first instance of the court, the employment permit will be revoked in accordance with regulations, travel abroad will be prohibited. Re-entering the country to work is not permitted.
(Source: Taiwan Animal Equality Association)

One year after Taiwan’s legislation, the US Congress passed legislation to ban dog meat on December 12, 2018, opening a new chapter in the history of human civilization. Genlin, the founder of the World Dog Alliance, did not stop there. In order to achieve the mission of banning dogs and cats, Genlin will also promote the International Convention to Prohibit the Eating of Dogs and Cats while promoting legislation in various countries around the world. He will “change human society, save dogs and cats.”