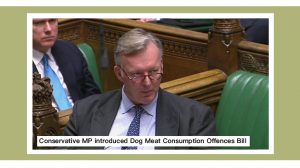 Conservative MP Bill Wiggin introduced a 10 Minute Rule Bill on 19 February, to make it an offence to consume dog meat and to transport, possess or donate dog meat for the purpose of consumption; and for connected purposes. 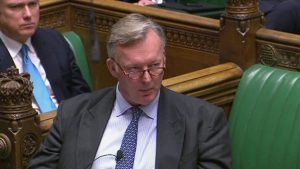 “Due to the vile way in which dogs are treated in Asia, I would like our country to join in setting an example to the world. Two months ago, a ban on the human consumption of dog meat was passed in the United States, following Germany, Austria, South Australia, Taiwan and Hong Kong. This Bill is an opportunity for the UK Government to join those countries in introducing a ban,” Bill Wiggin said in his speech.

“This Bill is not just about consuming dogs but about the extra suffering and cruelty involved.”

“Our laws usually reflect the respect that dogs deserve, and this Bill fits with our long and proud tradition of support for and insistence on the highest standards of animal welfare. As a nation of dog lovers and champions of animal protection, the UK must enact a ban on trading and consuming dog meat.”

“Making it an offence to consume dog meat, or to transport, possess or donate dog meat for the purpose of consumption, would highlight our country’s commitment to outlawing the practice globally and would cement the UK as a champion of animal welfare,” Bill Wiggin concluded in his speech.

Bill Wiggin introduced the Bill on the wheelchair due to his back injury, but this did not stop his will to speak for dogs.

The Bill is passd to Second Reading at the House of Commons unopposed, which is scheduled on 22 March.