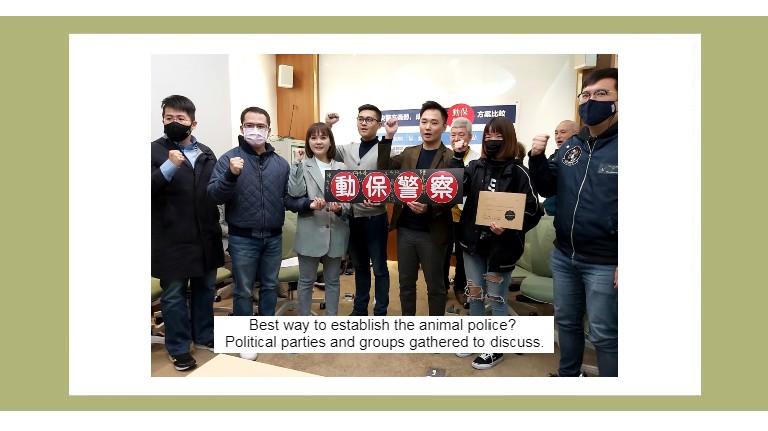 The youth representatives of the four major political parties in Taiwan all support the establishment of the animal police, but they differ slightly in the way it is established.

The cases of animal abuse and killing from time to time have made people in areas where the awareness of animal protection has matured. They usually require the government to establish an “Animal Police” to facilitate the investigation and solving of related cases, and to bring offenders to justice.

In 2010, a doctoral student who tortured and killed 10 kittens was sentenced to only 1 year and 6 months in prison. This caused an agitated crowd to call on the government to increase the punishment for animal cruelty and set up a dedicated animal police. More than 10 years later, during the period, a Chinese student in Macau slaughtered several community cats. The situation of poisonous killing of dogs and cats can be seen from time to time. The 2017 Animal Protection Law conforms to popular sentiments and raises the liability of animal protection criminal cases, but the “animal police” has not yet been formed.

Interestingly, the issue of animal protection has always been hailed in the Congress as a high-level consensus resolution that does not distinguish between blue and green. However, the issue of “Animal Police” caused a fierce battle between the DPP and the KMT Youth Department at the end of 2020. The investigation found that the two parties agree to the establishment of the animal police, but the concept is different. Therefore, the “Animal Protection Legislation Movement Alliance”, which strongly advocates the establishment of the animal police, started in 2021 and invited youth representatives from the four major political parties on January 6. They expressed their opinions and invited scholars who conducted research projects for the Council of Agriculture to hold a press conference together to work harder for the establishment of the animal police.

In fact, in response to the demands of the “Animal Protection Legislative Movement Alliance”, the Council of Agriculture specially commissioned Professor Wu Zongxian from the Department of Administration of Tainan University to conduct “animal police mechanism design and feasibility evaluation.” In addition to drawing on the establishment of foreign animal police, Functions, and locked in-depth interviews with animal protection inspectors, grassroots police officers, etc., only to submit a case closure report on December 28, 2020, and a total of 12 plans were proposed.

Wu Zongxian said that what he personally hopes most is to build a police force under the Committee of Agriculture, the competent authority for animal protection, but the funding may be as high as 200 million yuan (approximately US$7 million). According to the current financial situation of the government, it should be difficult to achieve, so he suggested that the mechanism design of the animal police should be simple first and then gradually become more complicated.

The members of the “Animal Protection Legislative Movement Alliance” also understand that funding and human resources are two major problems, so they also agreed to seek the first and then the better. After weighing the appropriateness of handling animal protection criminal cases and the available resources, they proposed A suggestion to be implemented from Option 7 or Option 8. Plan 7 refers to the existing conservation and forest police in the Seventh Corps, and then adds a group of animal police, and the police force belongs to the central government; while plan 8 refers to the current women and children police compiled by the county and city governments and places where the police are deployed.

The Taiwan government will ultimately choose an option. Although it is not well known, let us take a look at the establishment of animal police in various places:

The United Kingdom – The government commissioned the civil animal protection organization “RSPCA for the Prevention of Cruelty to Animals” to be responsible for the investigation and handling of animal protection cases. For many years, RSPCA has actively negotiated with the government, hoping to obtain public powers similar to those of the police, but was not allowed. When investigating cases involving the private sector, it is still necessary to cooperate with the police.

Queensland, Australia – The government also entrusts the investigation and handling of animal protection cases. The civil organization “RSPCA Queensland” is responsible for the investigation. However, the personnel of this organization have obtained many public powers, including access to private premises and confiscation. Animals, detaining evidence of cruel treatment of animals, issuing warnings or fines, and even applying for search warrants.

Netherlands – The “Animal Party” and “Animal Police” in the Netherlands are well-known all over the world, and there is indeed a close relationship between the two. The Animal Police is promoted by the Animal Party, and they are indeed police officers on duty. After professional training in animal protection regulations and abuse forensics, he is mainly responsible for pet and non-economic farm animal cases.

However, due to the impact of budget and insufficient police force, the development of the animal police has not been as expected, and most of the personnel are unable to focus on animal cases. Fortunately, due to the approval of the police agency, a certain number of staff is still reserved.

After seeing different types of animal police, did you choose your ideal model?