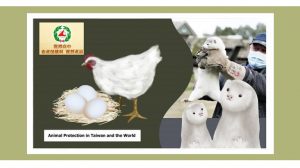 Animal Protection in Taiwan and the World

Animal protection has become part of the universal values as human morality evolves. It influences animals’ lives and public health alike. Farm animal welfare in Asia lags behind the West. Thankfully Taiwan has seen major improvements under the advocacy of animal organizations. The wide adoption of “cage-free eggs” is one example.

●The development of “cage-free eggs” in Taiwan

●2016 – “Act Governing Food Safety and Sanitation” was amended to legally certify “cage-free eggs labels”. The COA announced “Method to Apply for the Policy-Oriented Special Agricultural Loan” for eligible cage-free egg farmers to apply for a low-interest loan up to 30 million Taiwan dollars from the National Fishermen’s Association and the Agricultural Bank, encouraging cage-free transformation.

●Promotion of cage-free eggs in Taiwan in 2020

●October 2020 – The EAST urged Burger King Taiwan to abandon cage egg production the global trend. Burger King Taiwan responded that they would comply with the parent company Restaurant Brands International’s pledge to better animal welfare. The company is actively negotiating and planning with relevant domestic suppliers to speed up their cage-free transition.

The slogan of the EAST “Happy Hens Lay More Eggs” is in fact applicable to all farm animals. In 2020, the world has been shocked by the zoonotic coronavirus. The pandemic has alerted humans to the consequences of animal cruelty. The reputed Dr. Jane Goodall warned people severely about the welfare of farm animals.

Mink is one of the animals  susceptible to Covid-19. There are many breeding farms around the world, and a large number of minks have been culled, but this also made the Dutch fur farming industry shut down earlier. In addition, there are other The state announced that it will terminate the fur industry that “does not conform to contemporary animal welfare concepts”:

●On April 26, 2020, two mink farms in the province of Noord-Brabant in the Netherlands were first found to have mink infected with COVID-19. This was the first case of mink infection in the world. Subsequently, several mink farms were diagnosed In May, there were even cases of suspected mink transmission. In order to prevent the spread of the epidemic, the Dutch government ordered the culling in early June.

●The Netherlands is the world’s fourth largest producer of mink fur. There are about 160 mink farms. As of the end of August, 41 mink farms in the country have been infected and it is estimated that 2 million mink have been culled.

●The Netherlands was originally scheduled to implement a fur farming ban in 2024. Affected by the epidemic, the authorities announced at the end of August that all mink farms would be closed before the end of March next year (2021), two and a half years earlier than the original plan. The Dutch government 180 million euros (approximately US$212 million) will be allocated to compensate mink farmers.

●In July, there was news of a collective mink infection in a farm in Spain. The government ordered the culling of nearly 100,000 minks. The subsequent response measures were to strengthen the sanitary control of the farm and prohibit the transportation of animals and visits to the farm. It did not respond to international movements. The protection organization terminates the call for mink farms. There are about 38 mink farms in Spain.

●Denmark, the world’s second largest mink fur producer, also reported the news of mink infection in June. As of mid-October, 63 mink farms in northern Denmark had been infected. It is estimated that at least 2.5 million mink have been culled. Dozens of farms with suspected cases are still being tested, and the epidemic continues to spread. The Danish government has not yet proposed any plans to shut down the industry.

●In addition to the above-mentioned countries, outbreaks have also been reported in mink farms in Wisconsin and Utah in the United States. A total of tens of thousands of mink have been infected with the new crown virus and died. However, the local government has not implemented culling measures and only isolated them.

●Although it did not mention its connection with the epidemic, Poland, the world’s third largest mink fur producer, dropped a shock bomb in September. The ruling party proposed a bill to prohibit breeding animals for fur needs within a year. If passed, it will be in Poland. Of the 810 fur farms, about 700 will be affected by the ban. Mink farmed in Poland accounts for 94% of the total number of fur animals. Other animals include rabbits, foxes, raccoon dogs and chinchillas (chitterlings). It is currently known that the ban does not include the breeding of rabbits.

●In September, France, which has only 4 mink farms, also announced that it would terminate mink farming in the next 5 years and phase out industries that do not conform to contemporary animal welfare concepts.