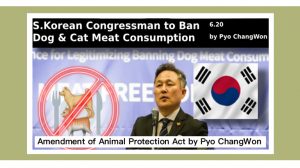 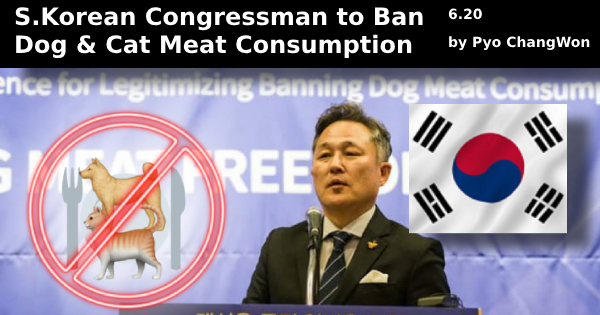 A proposed amendment to the Animal Protection Act was introduced on 2018, 6, 20. Animal rights organizations welcome this amendment and urge congress to pass it quickly into law. The existing Article 8 (1) of the Animal Protection Act enumerates instances of animal abuse. However, the amendment by Pyo Chang Won prohibits the act of killing animals in ‘principle,’
except when the animal is slaughtered or disposed of under the Livestock Sanitation Management Act or Livestock Infectious Diseases Prevention Act (exception 1) in order to prevent direct threats, when there is no other way (No. 2), or due to veterinary treatment (Case No. 3). In addition, in the past, it was permitted to kill an animal in order to prevent damage to property, but the amendment by Pyo deletes ‘in order to prevent damage to a person’s property.’

The meanings of the amendment to the Animal Protection Act are as follows.

Second, the amendment solves the problem of illegal slaughtering of dogs and cats, which are companion animals and not livestock according to the Livestock Sanitation Management Act, but which does not punish illegal slaughter because it conflicts with the Animal Protection Act. A prohibition against dog meat has been perceived as a violation of individual rights and personal preferences and has resulted in constant controversy. In contrast, the Livestock Sanitation Management Act prohibits the killing of animals other than livestock. This is a reasonable way to go beyond the problem. In addition, for food safety and public health, it is universally reasonable to slaughter only livestock according to the Livestock Sanitation Management Act. Therefore, it is recognized that this amendment safeguards public health as well as that of animals.

Slaughtering dogs for food is actually prohibited under existing law, and CARE was instrumental in recently securing the first conviction for its violation. However, this amendment is an example of the natural evolution of animal protection regulations in a developed society. It clarifies and tidies up the current complicated regulations and also puts forth directions to be taken. Also, in conjunction with Lee Sang Don’s recent legislative amendment to remove dogs from the list of livestock, it is a strong step toward the abolition of the dog meat industry. CARE has been consulting with Congressman Pyo Chang Won on this legislation, but it is the National Assembly that is responsible for passing this amendment into law and clearly defining
regulations for its enforcement.

CARE hopes that this government acts responsibly and ends the decades-long industrial-scale illegal slaughter of dogs in South Korea.