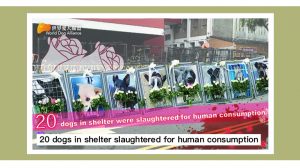 Taiwan police announced its full investigation on a missing case of 20 dogs on 26 July. It is confirmed that the 20 dogs adopted by a man and his uncle from three public shelters were sold to a man in Dajia District in Taichung. They were slaughtered by his Vietnamese migrant worker. Police found remains of the bodies, hair and collars in the empty house close to the man’s house. The case has been passed on to Taiwan Miaoli District Prosecutors Office.

20 spray dogs in shelter were adopted and slaughtered for human consumption.

It all started in March, 2018. The police once stopped the investigation with lack of evidence. Fortunately, no more dogs are killed with the help of volunteers. Volunteers also call for a strict system of adoption at public shelters to avoid similar cases in the future.

In March, an animal activist in Miaoli found two men setting up traps in the windbreak. Meanwhile, 8 spray dogs were found missing. She then reported the case to the police and posted pictures of those men on social media. Volunteers from Miaoli and Hsinchu later recognized the two men. They have been adopting dogs from shelters. Most of the dogs they adopted were trained and adorable, including Damei, the star dog at Hsinchu Shelter.

Police tried to collect evidence in March, but they failed to do so. Violators only received a fine of TWD 30,000 for trapping dogs.

Volunteers found that the Miaoli man and his uncle adopted 20 dogs, including 10 from Miaoli, 4 from Hsinchu County and 6 from Hsinchu. They claimed that they needed to guard dogs at their chicken farms. In fact, they do not own any farms. There are even no dogs at their house. When they were interrogated by the police, they said the dogs ran away or died accidentally. They were suspected to be dog meat vendors. They adopted dogs for their business. Unfortunately, there was not enough evidence. They were only charged TWD 30,000 for abusing dogs.

A praying event was held by volunteers and animal groups on 29 April to mourn for the dead dogs and pray for the missing dogs. Photos of the 20 dogs were aligned. People put down white roses in front of the photos. It is sad to see these dogs die innocently. During the praying event, volunteers called for a well-developed system of adoption at public shelters. They also urged the government to set up teams of animal police.

Volunteers held a praying event on 29 April to mourn for the dead dogs and pray for the missing dogs.

As the investigation met a dead end. volunteers turned to seek help from the Council of Agriculture Executive Yuan. The Council held a conference on reform of the adoption service offered by the public animal shelters. A “gray list” will be added in June 2018 on top of the black list to filter out suspicious applicants, who will be thoroughly investigated before delisting.

Key pieces of evidence were the collars found in an empty house owned by a man surnamed Zhuang. One collar belonged to an uncle-nephew pair surnamed Qiu. They adopted a black dog in a Zhubei shelter, where the dog had stayed for over a year. The volunteers thought she had finally found her family.

The police was working in low-profile. Miaoli County Police Bureau set up a Secret Group to Protect Dogs to conduct evidence collection, and assigned the investigation to Prosecutor of Miaoli District Procuratorate to track down the uncle-nephew’s adoption record for the Bureau to analyze.

The police examined the uncle-nephew’s vehicle surveillance image file and  compared tracked their driving record. Their findings concluded that Zhuan and his Vietnamese immigrant worker were main suspects. In June 2018, the Police searched the area he lived and found animal corpses, fur and collars in the house opposite to his home. The fur’s DNA matched the victim dogs according to the legal department.

County Police Bureau summoned Zhuang, his worker and the uncle-nephew after collecting enough evidence. The pair eventually confessed that they were hired by Zhuang to hunt dogs for the worker to slaughter at the price of 300 Yuan. The case was solved. The criminals would be punished according to Animal Protection Act, enforced by Miaoli County Police Bureau.

The 20 dogs were loved by volunteers. They did not give up and finally identified the murderer.

The case has not been closed yet. On 11 April, 2017, the Animal Protection Act was amended in Taiwan. The original Act has included ban on cat and dog slaughters and trade on their bodies. The amendment now stops people from buying, consuming or processing bodies, organs or food with cat and dog elements. This implies that people who eat dog meat will receive a fine of TWD 50,000-250,000. However, the police did not investigate Zhuang’s business contacts and customers.

The amendment has also included heavier punishment on slaughtering cats and dogs. Besides a maximum two-year jail time, there will be a fine of TWD 200,000-2,000,000. Zhuang hid behind his Vietnamese worker and let him bear all the guilt for the slaughter. He only admitted selling bodies to have light punishments. To fill up this loophole, volunteers and animal groups urge the Ministry of Labor to amend the law.

We should follow up this case and government’s response on such behaviors!

We should pay attention to and report cases of Vietnamese workers eating dog meat in Taiwan. This is the only way to solve the problem.