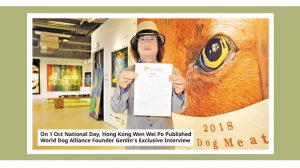 World Dog Alliance, founded by Hong Kong philanthropist and famous Chinese animal protectionist Genlin, has been actively promoting “926 Dog Lovers’ Day” in recent years, organizing global animal protection activities and promoting “Explicit legislation banning dog meat consumption” in Asian countries. With an unexpected turn, his promotion of banning dog meat consumption was seen by Western animal organizations as “Chinese people love eating dogs”. A signature petition has been launched online, with close to 600 thousand signatures, boycotting the 2019 World Dog Show being held in Shanghai. Genlin has issued a solemn declaration pointing out that not only would the boycotting events impale the hearts of billions of Chinese dog lovers, but would also bring about adverse effects on the activities banning dog meat consumption. Genlin hopes to initiate a petition of Chinese Dog Lovers in answer to the misunderstanding from the West, and support Shanghai to host the 2019 World Dog Show.

As the only animal organization that promotes “Explicit legislation banning dog meat consumption” in Asian countries, World Dog Alliance has started organizing of a petition on the 2018 South Korea Winter Olympics and banning dog meat consumption, which acquired 100 thousand U.K. citizens’ signatures and promoted the U.K. Congress to debate on the issue. On 12th September, the U.K. Congress debated and will put pressure on South Korea to end dog meat consumption by diplomatic means. Mainstream media like the Daily Mirror and the Sun made detailed coverage, but sadly, this drew U.K. citizens’ attention to China’s dog eating habits. Care 2, a website about “human and animal rights”, with 30 million members, launched a petition, namely “Boycott Shanghai from hosting the 2019 World Dog Show, abolish Yulin dog meat festival”, this petition in turn obtained 600 thousand signatures.

Genlin indicates that the corrupted habits of dog eating exists not just in China, in fact it is more widespread in many Asian countries: 20% of China’s population consumes dog meat, but is slowly decaying, South Korea at 60%, with Vietnam reaching up to 80% of the population! When dog eating is brought up, China immediately comes to mind of Western people, which is totally unfair. Genlin states that dogs have been human’s most loyal friends since thousands of years ago, they share the same emotions that we possess. Dog owners treat their dogs as their children, and are all indignant about dog eating. China should not be pinpointed, and World Dog Show should not be associated with Yulin dog meat festival.

According to Genlin, China has over 30 billion dog owners, an increasing number of people are adverse to dog eating, he is now uniting dog lovers of all walks of life to ban dog meat consumption in China. “World Dog Show” being held in Shanghai would be like the Oscars of the dog loving community, it will contribute to the promotion of banning dog meat consumption in China. Drastic actions of boycotting will not only fail to crack down on the Yulin dog meat festival, but may also cause the Chinese to resist pressure from the West, hindering the process of dog meat banning.

Promote Legislation due to Indignation about Dog Eating in Hometown

Genlin, who is now promoting banning dog meat consumption, has been doing charity work for the past two decades, and has donated over 100 million Hong Kong dollars (about 13 million US dollars) to help those in need. In recent years, Genlin is primarily focused on saving human’s most loyal friends, the dogs, and has spent over 4 million US dollars over the past few years. When Genlin’s marriage had its crisis, his Pomeranian greeted him and spun around him when he gets off work, its passion from the bottom of its heart gave Genlin unlimited warmth, dogs became the most important part of his life ever since. He now has people taking care of his dog in his U.S., Hong Kong and France residence. Banning dog meat consumption under the name of World Dog Alliance originated in 2013, Genlin came back to his hometown, Guizhou province, for a charity event, and found out that “Huajiang dog meat” was a famous dish. He was outraged, and then hired specialists to research on China’s dog meat consumption issue, and confirmed that each year, around 20 million dogs are slaughtered and brought onto restaurant tables, most of which being stolen pets. These dogs are their owner’s babies, the damage inflicted and anger of dog lovers are understandable. Genlin originally wanted to support organizations that promote banning dog meat consumption and criminalizing dog stealing, but no organization explicitly work on these issues directly. That’s the reason he said to himself that he would be the one who does these, and expends his all-out effort on World Dog Alliance’s activities.

90% Wealth to Salvage the “Loyal Friends”

Genlin advocates peaceful promotion of banning dog meat consumption, only pressure from top level government officials can bring about maximum effectiveness. Some animal activists take a fierce approach, stopping trucks on highways and had physical conflicts with dog dealers. These means are unsafe, yet illegal. The dog banning activities should be spread to dog eating countries, and should not be limited to China. As such, Genlin is now communicating with animal organizations over the world, and has donated large sums of donations to Mainland and Asian countries for dog rescue and protection projects. World Dog Alliance organized the first “926 Dog Lovers’ Day”, where he donated tens of thousands US dollars to animal activists. Taiwan will legislate banning dog meat consumption very soon, World Dog Alliance therefore held the “926 Dog Lovers’ Day” in Taiwan this year. Genlin plans to invite Taiwan legislators to Mainland China for a dog lovers’ forum, prompting China to legislate banning dog meat consumption. Genlin indicates that banning dog meat consumption is the significant symbol of a civilized society. How can human eat their own best friends? Genlin will only save 10% of his wealth for his family and friends, the rest will be used on charity projects, especially those on the salvation of dogs.